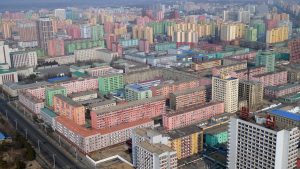 To date, assistance for North Korea’s economy has not factored into negotiations between the United States, South Korea and North Korea in any real or meaningful way. South Korea’s President Moon Jae-in handed Kim Jong Un a USB stick with grandiose plans for infrastructure investments at their first summit on April 27, and South Korean companies are looking into how they can best reap the benefits if tensions continue to de-escalate. Trump administration officials, as well as the president himself, have suggested that American companies could come to North Korea en masse if relations between the countries improve, meeting stern rebuke from North Korea’s Rodong Sinmun and government officials. Despite these overtures, little concrete information has emerged about how the US and South Korea plan to leverage Kim’s commitment to economic growth in current negotiations.

At this early stage, this omission may be natural. Going forward, however, it is crucial that the United States, South Korea and the other countries involved in the process not only use wise economic policies, but also coordinate amongst themselves for a consistent, coherent approach that encourages North Korean economic development.

The country’s economy already figures implicitly in nuclear negotiations, since removing sanctions is frequently cited as a carrot for North Korean concessions on denuclearization. Sanctions relief, however, is too narrow of a focus. Kim Jong Un has suggested several times that he is serious about developing North Korea’s economy beyond its dismal state, where it was even before sanctions stifled most of its foreign trade. The international community should leverage Kim’s ambitions and offer assistance for economic development, and direct such assistance to spur North Korea’s shift toward a more market-based economic system. Most aid, if it comes at all, will likely be provided by China and South Korea. The US too, however, has signaled its willingness to provide North Korea with economic assistance in the event of a deal on the nuclear issue.

In a new report by the Center for a New American Security (CNAS), we argue that the US and its allies should use economic tools when engaging with North Korea to incentivize systemic change in the country’s economic system, primarily through technical assistance to improve economic governance. This would not only benefit North Korea’s economy and enhance the people’s livelihoods, but could facilitate the North’s gradual integration into the global economy.

Kim Jong Un may not be North Korea’s Deng Xiaoping—at least not yet—but his intention to develop North Korea’s economy is clear. Kim stated in 2012 that the North Korean people should “never have to tighten [their] belts again,” and the following year, he launched the byungjin strategy for the parallel development of the national economy and nuclear weapons, with equal importance. Furthermore, on April 20 of this year, Kim declared that the state’s primary emphasis will be on economic development from now on, since the nuclear deterrent is deemed secure.

While in Singapore for the summit with Trump, Kim praised the country’s economic development, and Rodong Sinmun’s front page for June 12 quoted his promise to bring home lessons for North Korea’s progress. Moreover, much more under the radar than public proclamations, Kim’s tenure has seen North Korea’s semi-private market system grow, further experimentation in agricultural management explored, and state-owned enterprises have been granted unprecedented liberties in production planning. In short, Kim Jong Un has staked a great deal of his legitimacy on improving economic conditions.

The North Korean economic system has already in many ways changed beyond recognition from the rigid planning model that prevailed before the system broke down in the 1990s, following the fall of communism in Europe and China’s diplomatic reorientation. The US and South Korea should leverage this economic focus in diplomatic dealings with Pyongyang, but in a way that promotes sustainable growth through institutional change in the North Korean economy.

Sanctions relief will be an essential carrot for Pyongyang, but it won’t be enough for Kim to realize any transformative economic growth. North Korean policymakers have long been keen to diversify their trading partners beyond China, which accounts for about 90 percent of the country’s foreign trade flows. China’s tightened enforcement of sanctions against North Korea since around September 2017 has likely driven home this point further to North Korea’s leadership. The removal of economic sanctions alone won’t do much to change the structure of North Korea’s external economic relations. As an additional incentive in the diplomatic process, the international community, at the appropriate time, should consider sponsoring North Korea for membership in the World Trade Organization (WTO). Accession into the global trading system would be a lengthy process, requiring North Korea to undertake a wide range of reforms in both the micro- and macroeconomic realms, such as systemic changes to allow for freer competition among domestic economic actors. None of this is to say that North Korea should be handed a laundry list of market reforms to conform to any other country’s economic model, a proposition the regime would likely reject, as it has stated publicly. Rather, armed with the right incentives, the international community would support a process of systemic changes in economic management that North Korea has in many ways already begun itself.

Refraining from doing “wrong things” is just as important as doing the “right things.” One realm with plenty of potential for mistakes, as well as opportunity, is North Korea’s special economic zones (SEZs). Kim Jong Un designated over a dozen new areas as SEZs in 2013 and 2014. North Korea’s predilection for SEZs goes back to the late 1980s, and it isn’t surprising that Kim has pushed for the concept. Through SEZs, the regime can keep institutional changes in the economy and foreign capital investments contained to specific areas with few spillovers into the rest of society, as evident in, for example, the Kaesong Industrial Complex (KIC). Seoul may have to resuscitate Kaesong, if only because it could be a ‘quick hit’—an early deliverable on the hope of a new relationship. But KIC should also be seen as returning to a bad investment model rather than pursuing a more promising future.

At worst, SEZs become a mere source of income for the North Korean regime, helping it put off necessary changes in the economic system as a whole. At best, however, they can provide an arena for the government to experiment with institutional change before taking it further. In return for concrete and real actions on denuclearization—however this term comes to be defined—the international community should consider supporting North Korea’s SEZ-efforts, as part of a process where the regime takes simultaneous steps to create a functional institutional environment in the economy as a whole. The international community could, for example, support the infrastructure for a small number of particularly promising SEZs. In the process, they should set concrete conditions, such as, for example, the state letting investing firms hire and pay workers directly, and sourcing production inputs from the domestic North Korean market. These are two measures that would link SEZs to the domestic economy, ensuring that they don’t just become hard currency channels for the regime. The SEZ-model is deeply flawed in many ways as a catalyst for economic development, but the international community can leverage the North Korean regime’s preference for SEZs to help spur a broader, positive development.

Overall, the international community needs to stand ready not just to let up on sanctions on North Korea as a reward for progress on the nuclear issue, but to incentivize and assist the regime in changing the economy as a whole. The country has publicly rebuffed the idea that it will take US support for its economic construction in return for concessions on its nuclear program. The suggestions outlined above, rather than imposing a systemic change that the North Korean government would turn down, build on changes in the economic system that the regime has already begun. Whatever measures relating to the North Korean economy that the international community takes in the upcoming diplomatic process, these must aim at spurring sustainable and inclusive economic growth beneficial to the general public of North Korea rather than just the elites.