Recent commercial satellite imagery indicates that North Korea has finished work on the secondary cooling system for the 5 MWe reactor. It is unclear whether the detection of water flowing from the pump house indicates that the system is being tested or that the reactor is beginning operations.[1]

Satellite imagery also indicates that operational testing of the experimental light water reactor’s (ELWR) secondary cooling system is ongoing and may have begun as early as late March 2018. Thermal infrared (TIR) imagery confirms that despite the testing, the reactor itself was not yet operational as of June 14. Testing of these systems is likely standard procedure to ensure the safe and efficient use of the reactors if they resume/start operations.

In addition to two previously identified non-industrial, blue-roofed buildings, two additional structures have been recently built, with one now in each of the four major operational areas of Yongbyon. Their purpose remains unclear, although one possibility is for use by VIP visitors, either senior North Korean staff or officials, or foreigners.

Several other previously noted infrastructure modifications projects now appear to have either been completed or are nearly complete.

Although modifications to the 5 MWe plutonium production reactor’s cooling system begun in March 2018 appeared essentially complete by June 21, the previously identified “probable weir” was removed by June 30, and new dredging was underway near the water channel leading between the new pump house and the river. There was also no longer any visible sign of cooling water discharge from the outfall pipe. (Figure 1)

Figure 1. Modifications to the 5 MWe reactor’s secondary cooling system continued between June 21 and 30. 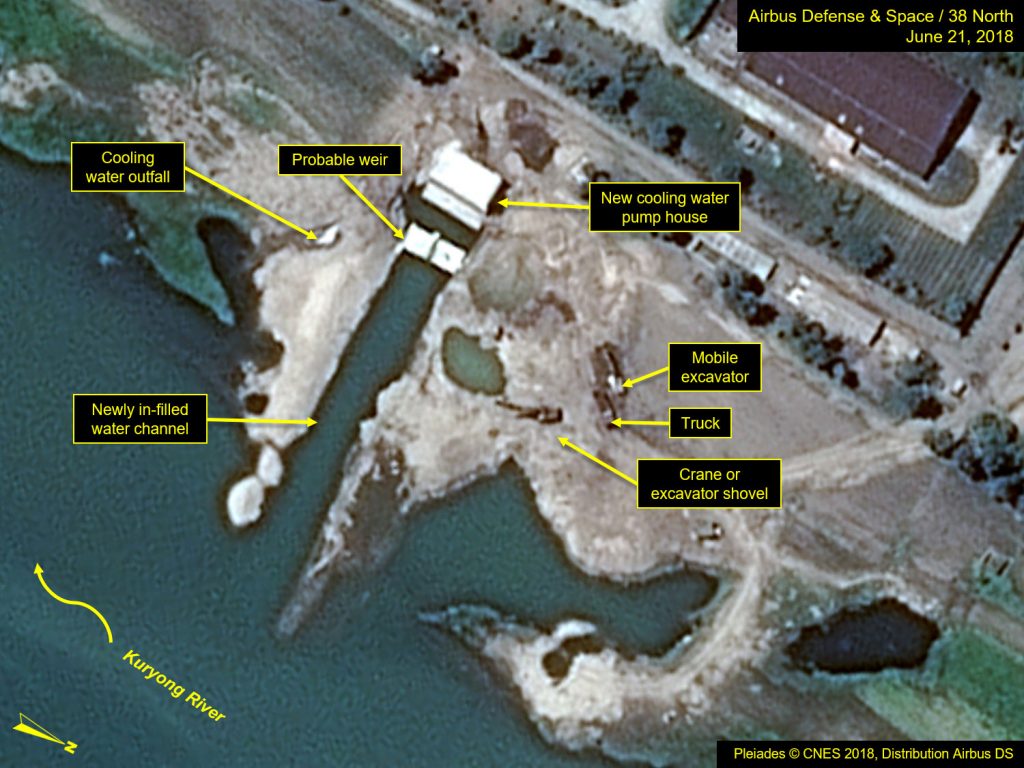 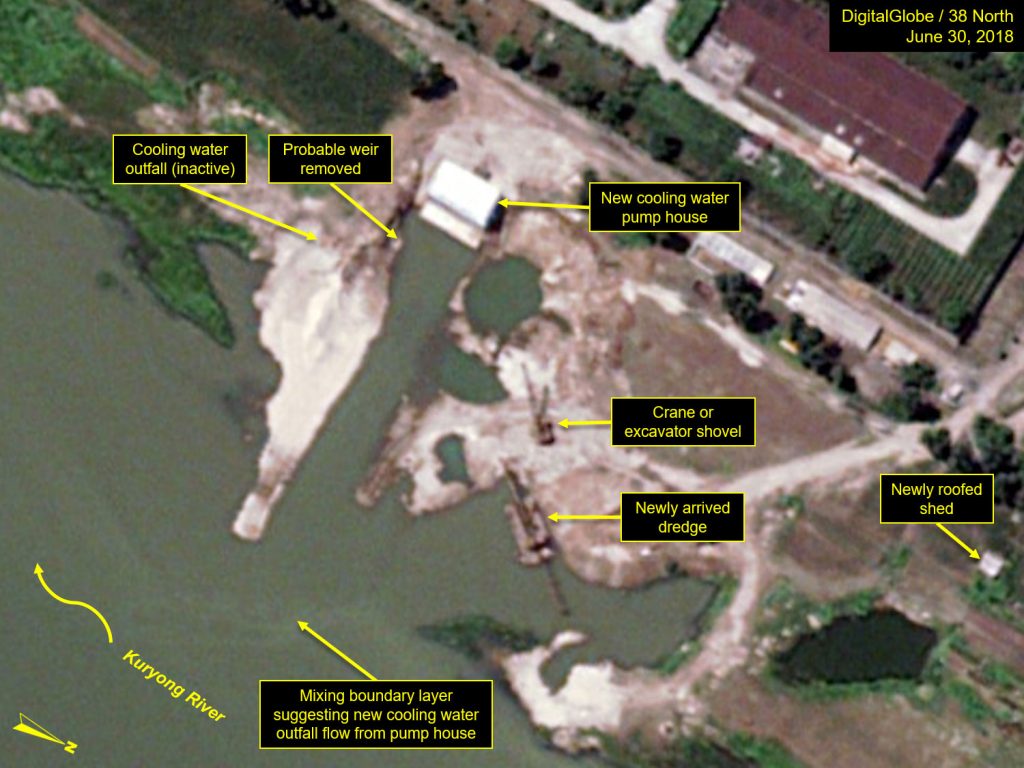 Satellite imagery from June 30 appears to show a subtle mixing/eddy interface between water from the channel as it curves around the embankment into the southerly flowing Kuryong River. (Figure 2) [Slide 3] This would suggest that the pump house most likely serves as a cooling water outfall, not an intake, to replace the visible outfall pipe flow that previously provided a more obvious signature of reactor operations. Whether that means the reactor is now operating remains unclear given the lack of corroborative evidence. No thermal infrared imagery of the reactor has been available since the apparent flow was detected. Moreover, there is no evidence of visible steam venting from the generator building last noted in February.

Figure 2. Water appears to be mixing as it curves around the embankment toward the Kuryong River.

In previous reporting, the specific role of the ELWR’s pump house, whether it was for an intake or outfall, was unclear. However, evidence that the similarly appearing pump house at the 5 MWe is more likely a secondary cooling water outfall would suggest the same role for the ELWR’s pump house.

Satellite imagery indicates water ripples along the length of the walled river embankment from the pump house to the sluiceway waterfall, which suggests continuous flow into the river. (Figure 3) In previous reporting, satellite imagery from March 20 showed this area blocked by sandbars, but ten days later the bars had been cleared.[2] That suggested the sandbars could have been washed away by an initial outfall of cooling water from the reactor’s cooling water system.

Figure 3. Water ripples can be seen from the ELWR pump house to the sluiceway waterfall.

Figure 4. No significant heat signature at the ELWR as of June 14.

Satellite imagery shows that two new bluish-roofed buildings have been constructed similar to the two previously identified near the ELWR and the Radiochemical Laboratory. The buildings are now located in four operationally distinct areas at Yongbyon. (Figure 5) The first—completed in August 2017 at the former Fuel Fabrication Area that now houses the Uranium Enrichment Plant and the Radioisotope Production Facility—may have been the model for the three other similar buildings constructed more recently. The three additional structures were built: 1) at the Laboratory Research Area between May 6 and June 21, 2018; 2) in the Reactor Power Area between May 6 and June 21, 2018; and 3) near the Radiochemical Laboratory between May 6 and June 21, 2018. Satellite imagery from early May 2018 showed that the interior room layouts of two of the buildings are identical as well with four different sized rooms. (Figure 6)

Although the purpose of these four bluish-roofed buildings is currently unknown, one possibility is that they could be intended for hosting high-level staff or VIP visitors.[3]

No Activity at Other Key Facilities

No significant change has been noted at the Radiochemical Laboratory or associated Thermal Plant, the Uranium Enrichment Plant or the Radioisotope Production Facility where infrastructure improvements described in our last update now appear complete.