Commercial satellite imagery from March 30 indicates that North Korea may have shut down the 5 MWe (plutonium production) reactor for the time being. A major excavation project has also begun near the cooling water outfall, which, when coupled with recent efforts to dam the river below this point to create a reservoir, could indicate an attempt to provide a more steady flow of water into the facility. This would allow for the reactor to run more continuously and safely in the future.

There is also new truck activity at the reactor, the purpose of which is unclear but could include maintenance or repairs, the movement of spent fuel rods to the Radiochemical Laboratory from the spent fuel storage pond, or the offloading of fresh fuel to the reactor. Despite the apparent reactor shutdown, there was no evidence (as of March 30) of plutonium reprocessing taking place at the Radiochemical Laboratory. However, this development should be monitored closely in the future.

At the Experimental Light Water Reactor (ELWR), work continues on an adjacent building that may be a laboratory or for engineering support, but there are no obvious signs that the reactor is approaching operational status.

Recent commercial satellite imagery indicates that the 5 MWe reactor may have been shut down since it was last observed in late February, given the lack of clearly visible steam plumes at the Generator Hall. Moreover, a major transformation is underway in the area where the reactor cooling water outfall is located, which involves a large excavation project along the riverbank. While it is still too early to tell the exact purpose of this work, given its location along the river and near the existing outfall, it could be related to the reactor’s secondary water-cooling system. Coupled with the recent addition of an earthen dam and sluiceway below this point creating a reservoir, the end result might be to alleviate previous concerns about the steady supply of water to the system due to seasonal variations in river flows. This would enable the reactor to operate on a more continuous basis in the future. (See Figures 1 & 2)

Figures 1 & 2. Overview of activities at the 5 MWe reactor. 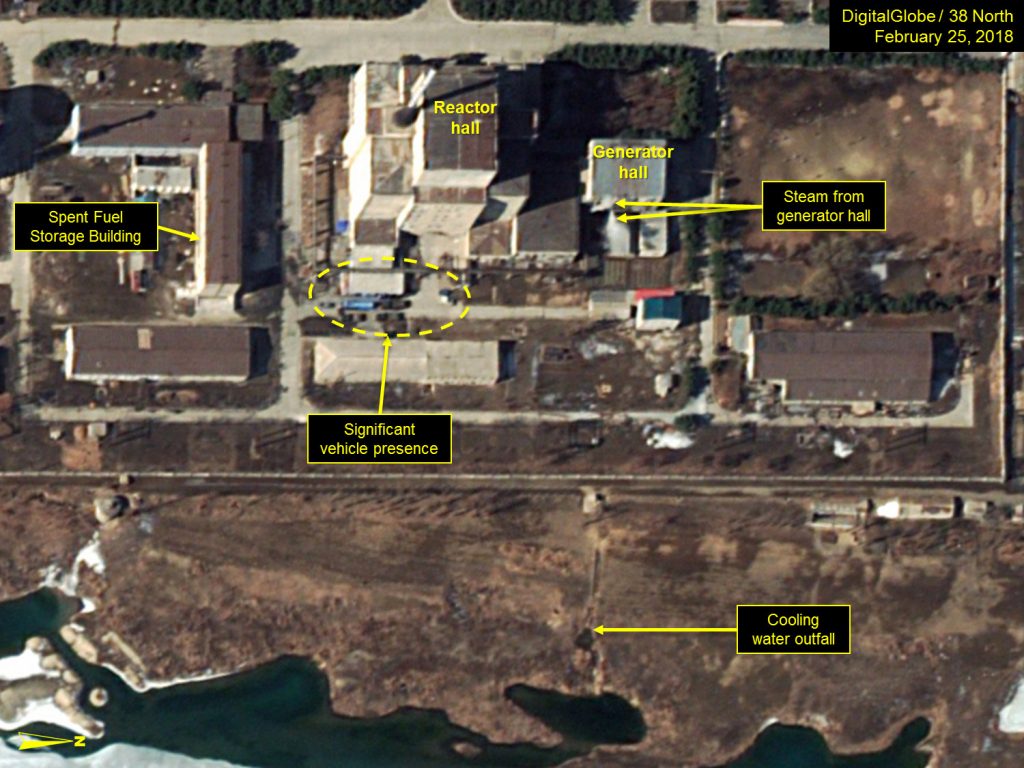 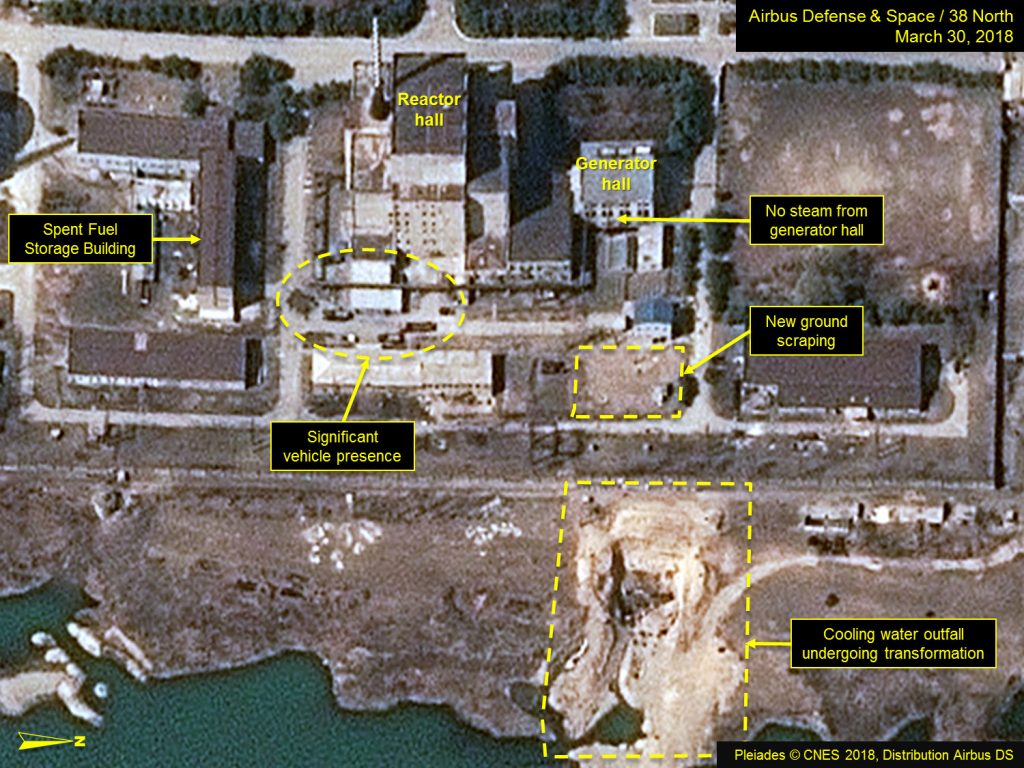 Additionally, an unusual number of large vehicles were parked at the rear of the 5 MWe reactor. (See Figure 3) Among these vehicles, there are at least three large trucks, two of which appear to have a tank/cylinder/cask on their trailer beds. What may be a mobile crane covered with a tarp is located nearby. The purpose of these vehicles is unclear, but could be part of a new maintenance project, related to the transfer of spent fuel rods from the reactor’s adjacent spent fuel storage pond to move them from the facility to the Radiochemical Laboratory for reprocessing, or to deliver fresh fuel.

Figure 3. Close-up of vehicular activity at the rear of the 5 MWe reactor.

Presently, imagery indicates only routine vehicle movements and no activities associated with preparations for, or an ongoing, reprocessing campaign at the Radiochemical Laboratory. If such a campaign were underway, it would be usual to see operational indicators such as railcars at the Receiving Building (particularly like the specialized railcars observed at the nearby Pungang-ni Rail Yard, the main rail yard serving Yongbyon during the last suspected reprocessing campaign in early 2016), smoke from the smokestack of the coal-fired Thermal Plant that provides steam to the Laboratory, and vapor emanating from the Laboratory’s cooling tower would usually be observed. (See Figures 4 & 5) 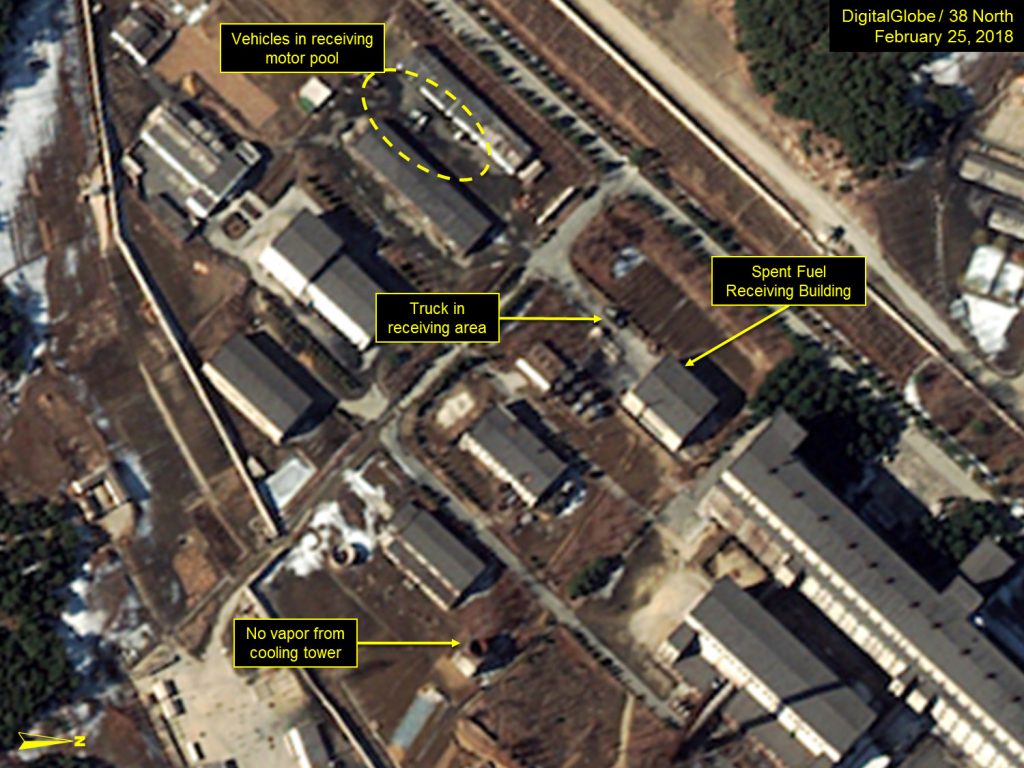 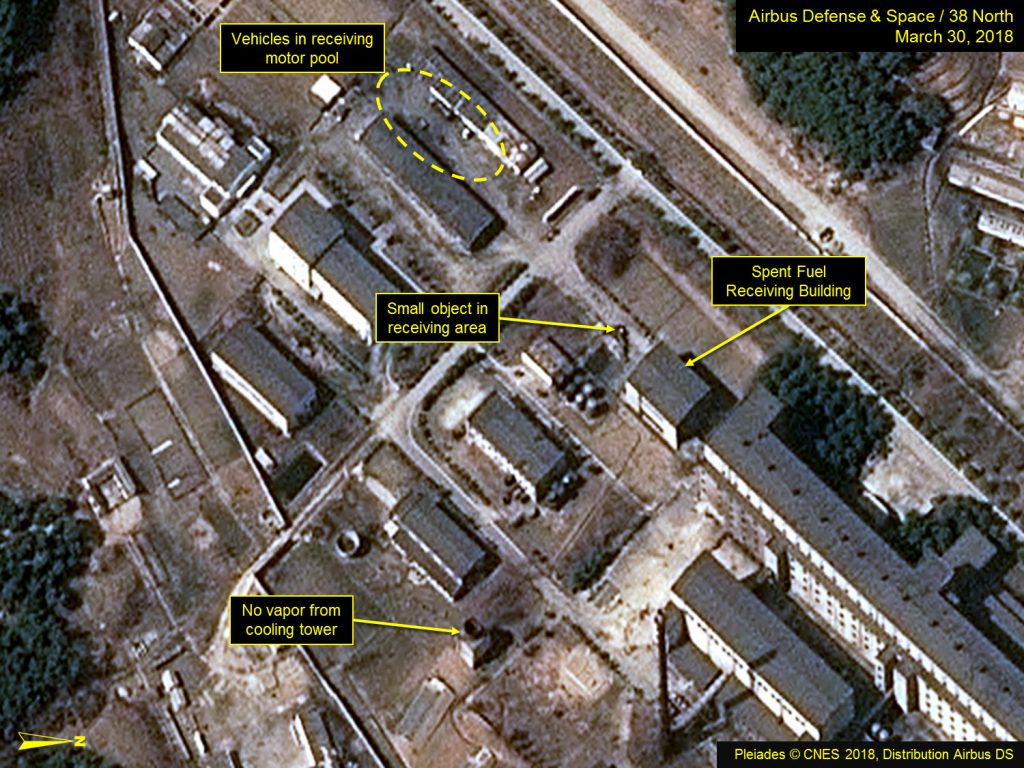 Continued Construction at the ELWR

The construction of a new, permanent structure—probable engineering support, laboratory or office building—located directly in front of the ELWR, has continued at a rapid pace in the 10-day period since its construction was first observed. A large crane could be observed with its boom angled over the building’s foundation. (See Figure 6 & 7) Work may have also been underway near the pump house located just upstream of the earthen reservoir dam and sluiceway to clear the area on the river side of the pump house, possibly to ensure either the necessary volume of dependable cooling water intake beyond what is provided via the cisterns alone (if used as an intake) or an unimpeded opening if used as a cooling water outfall. (See Figure 8 & 9) At this time, the ELWR does not yet appear to be operational, and it remains unclear when full operations will begin.

Figures 6 & 7. Building construction continues in front of the ELWR. 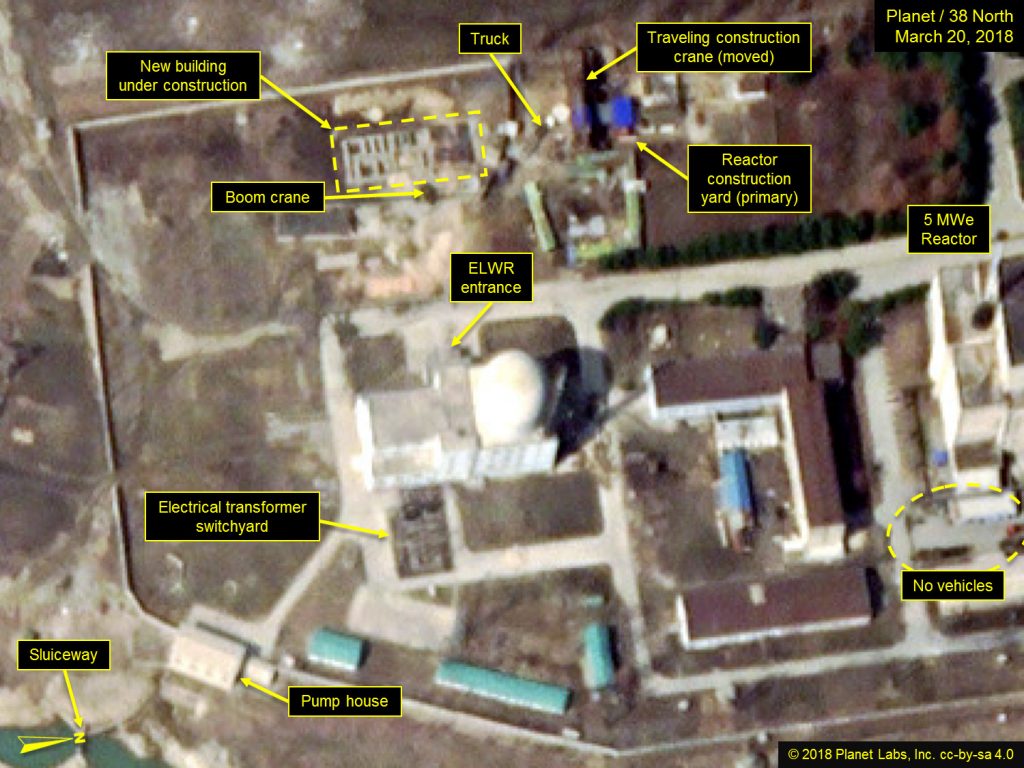 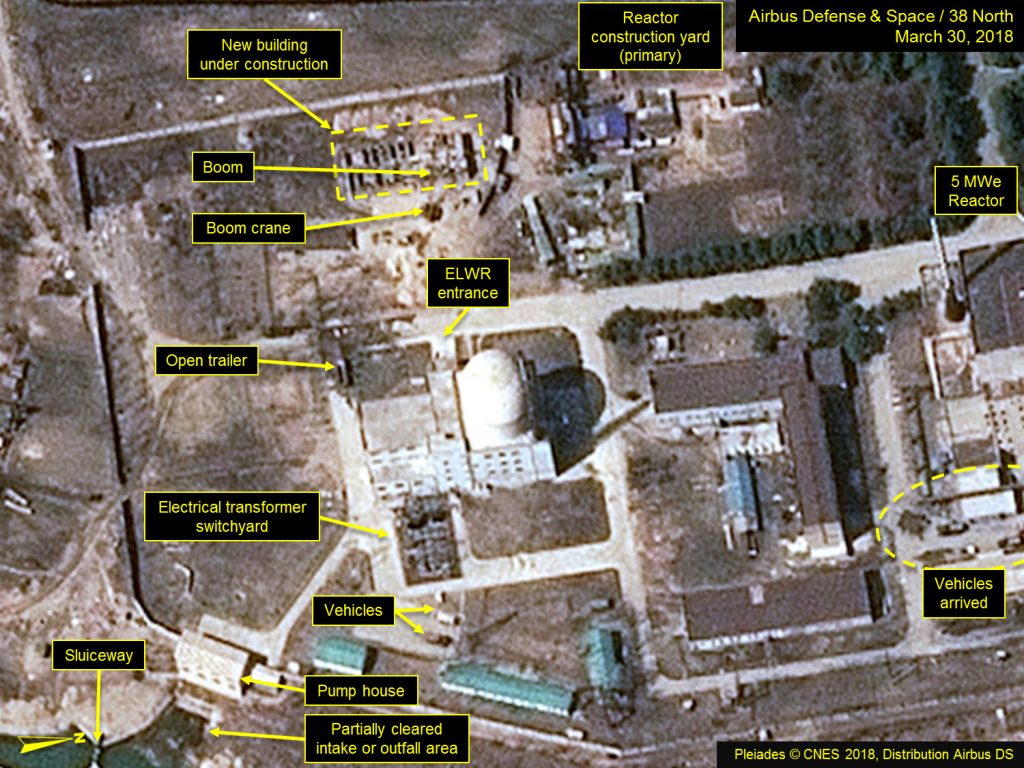 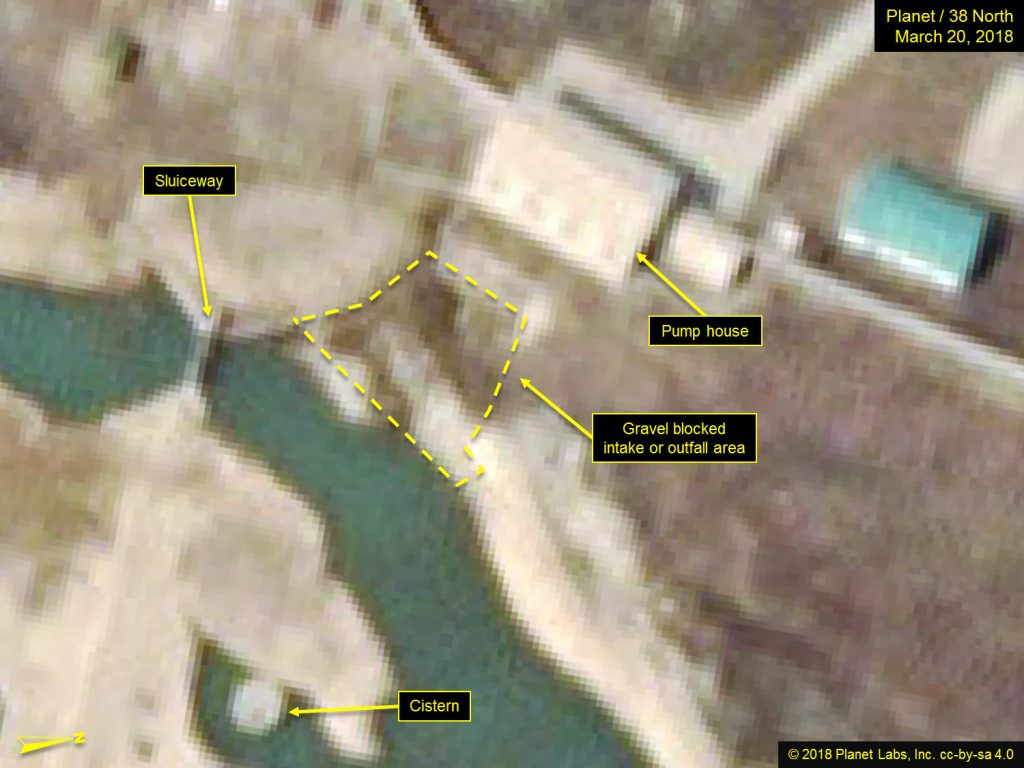 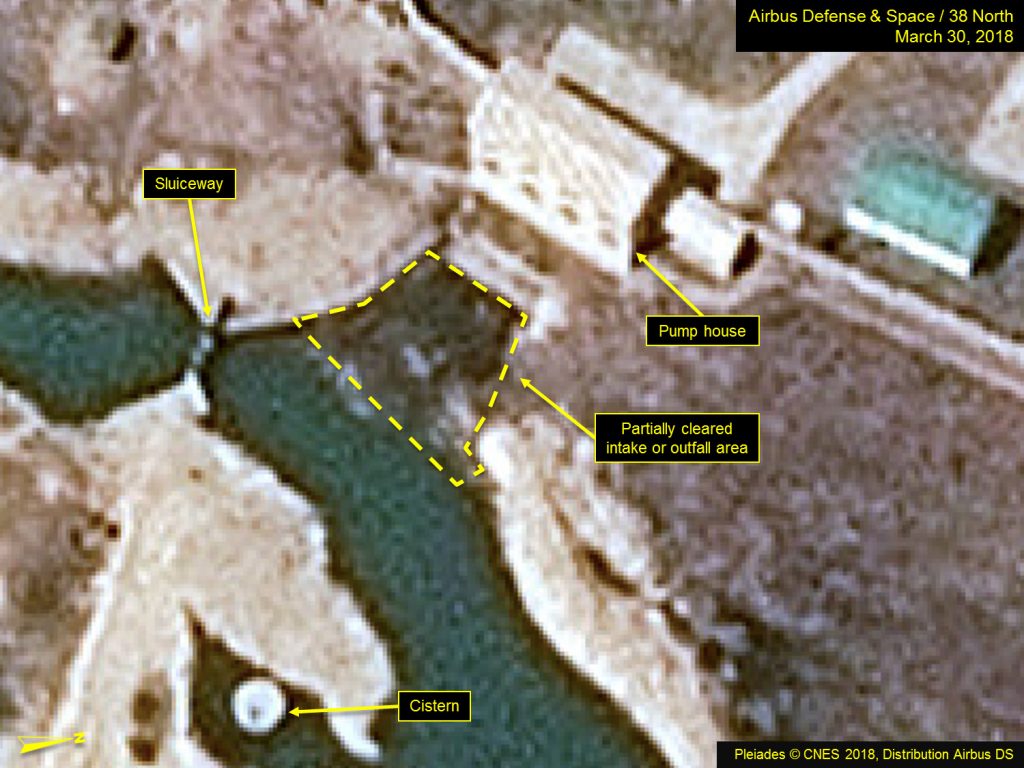 One other notable change is the clearing of the military encampment, which was first observed in imagery from February 25. (See Figure 10 & 11) It is unclear, however, what purpose this encampment served when it was operational. 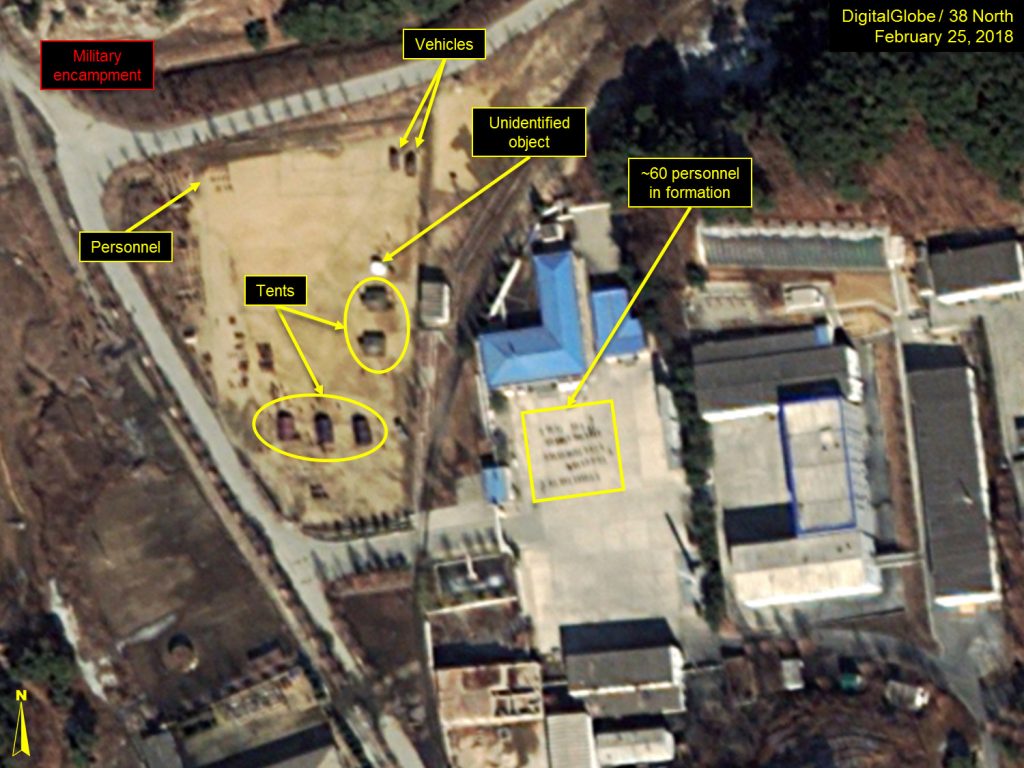 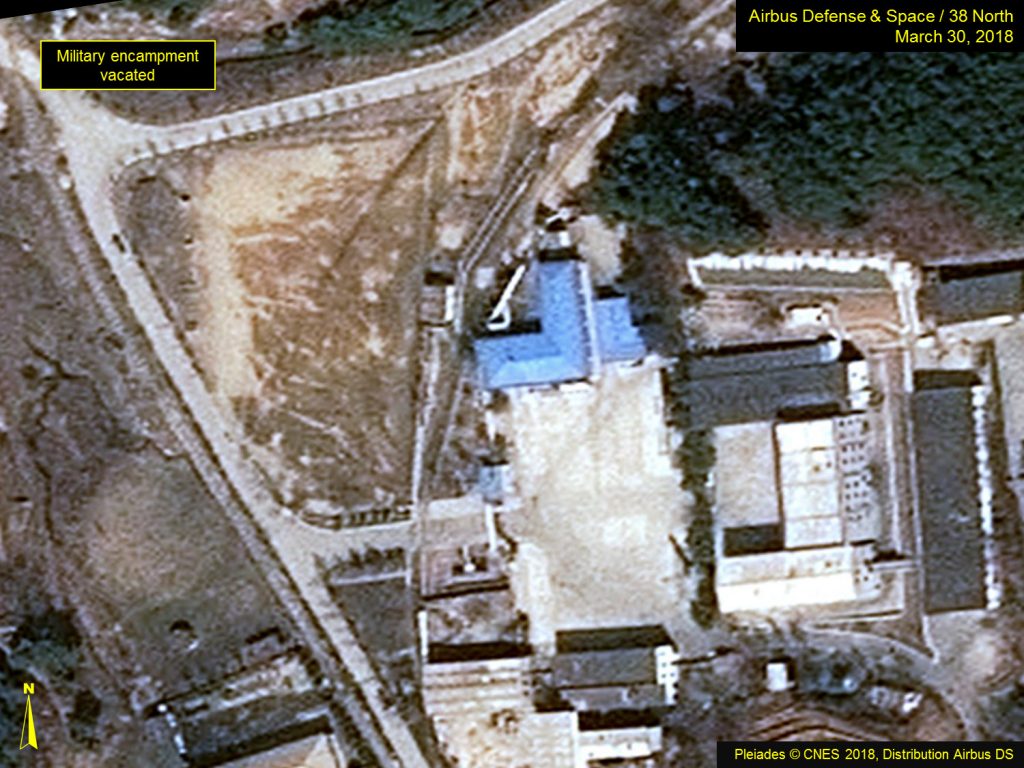