Commercial satellite imagery of North Korea’s Yongbyon Nuclear Scientific Research Center from February 25 indicates that the 5 MWe reactor continue to show signs of operation as indicated by steam vapor plumes emanating from the generator hall and river ice melt near the reactor. Under normal operations, we would also expect to see a cooling water discharge near the river outfall. And while vapor plumes have been noted a few times over the past year, no cooling water discharges have been observed to support this conclusion. However, we cannot rule out that the North Koreans may have suppressed this signature by extending the discharge pipe into the river. If the reactor is operating again, as the evidence suggests, it means North Korea has resumed production of plutonium presumably for its nuclear weapons program. It also means that the North has likely extended its cooling water pipeline into the river (rather than near the river) to better conceal the reactor’s operational status, making monitoring efforts more difficult going forward.

In the southern parts of Yongbyon, a military tent camp has also been set up in an area known as the Yongchu-dong Support Area and increased personnel have been observed around the complex. The camp is located at the intersection of two roads leading to the Radiochemical Laboratory and the former Fuel Fabrication Area that includes the Uranium Enrichment Plant. It is unclear what specific role this military camp will play, but it could be to support new construction and/or improve site security. (Figure 1)

Operations at the 5 MWe Reactor

A steam vapor plume was observed at the 5 MWe reactor on imagery from both February 17 and 25. (Figures 2-3) Such plumes have generally been a useful indicator of reactor operations, however, they were usually accompanied by a cooling water discharge near the river outfall. The fact that no cooling water discharges have been observed in either of these images may mean that the vapor plume is unrelated to reactor operations, or, more likely, that the outfall pipeline has been extended further into the river. If the latter is true, the absence of this operational indicator will make monitoring efforts more difficult. It could also reduce erosion from splashing water. The presence of ice melt on the river supports the conclusion that the reactor is indeed operating and that the outfall pipeline has been extended. As the visible signatures of reactor operations decrease, especially in the summer months when ice melt is not a factor, low resolution thermal infrared satellite imagery provides an alternative means for operational monitoring.

Additionally, two large open bed trucks were present at the rear of the 5 MWe reactor hall in imagery from February 17—one appears to have its bed lined with a blue tarp-like material. Such vehicles exhibiting this blue feature were observed at the rear of the reactor in 2015 and 2016 as well, but their exact purpose is unknown. Some possible explanations are that the trucks (both then and now) may be used to transport fresh nuclear fuel or carbon dioxide in containers to the reactor. If the one truck is indeed lined with a blue tarp, it may be meant to transport contaminated material or equipment away from the reactor. 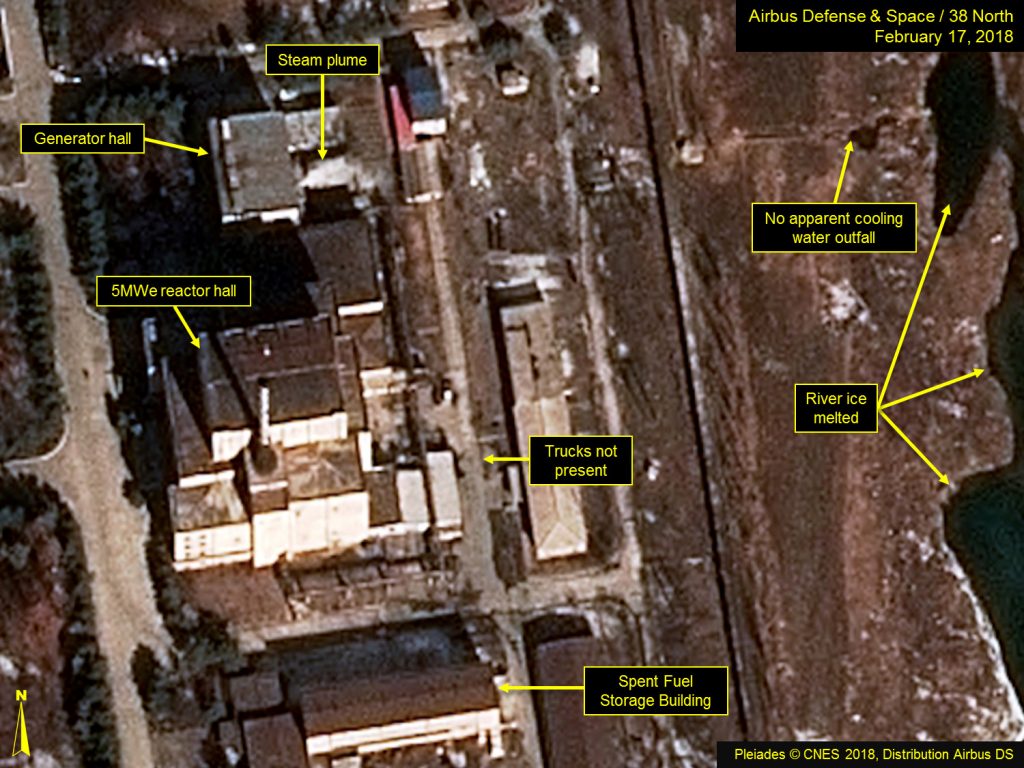 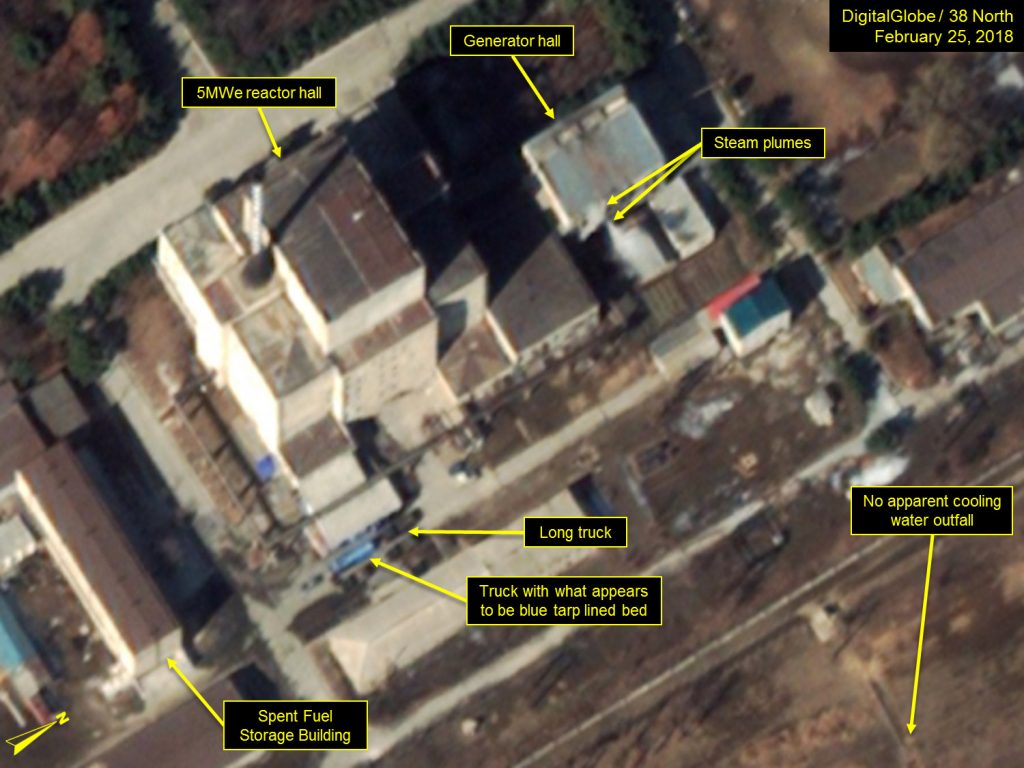 Military Encampment Set Up and Increased Personnel on Site

The military tent camp in the Yongchu-dong Support Area was established subsequent to February 17. The camp is situated at the main intersection in the southern sector of the Yongbyon complex, connecting the Radiochemical Laboratory, the former Fuel Fabrication Area that includes the Uranium Enrichment Plant and the probable Isotope/Tritium Production Facility. In imagery from February 25, five double-section tents are present, along with one unidentified white object. There are numerous groups of personnel within the camp as well as a large contingent of personnel in formation within the courtyard of the Yongchu-dong Support Area’s administrative section. (Figures 4-5) Since last December, a new roof has also been installed on one of the smaller multi-room buildings in this support area. (Figures 6-8) Additionally, a single tent was recently erected in another support area serving the thermal plant.

Over the past few months, an increasing number of personnel have been observed at various locations throughout the Yongbyon complex, particularly in the courtyards of support areas and compounds. This trend continues in late February.

The purpose of allowing an increased number of personnel visible throughout the complex may be intentional—perhaps a play to satellites and external observers (e.g., somewhat reminiscent of the multiple volleyball game displays at the Punggye-ri nuclear test site observed on April 16 last year). But the groupings may also be something as mundane as a coordinated effort to hold “fire-drills” or other training or maintenance efforts. (Figures 9-11) 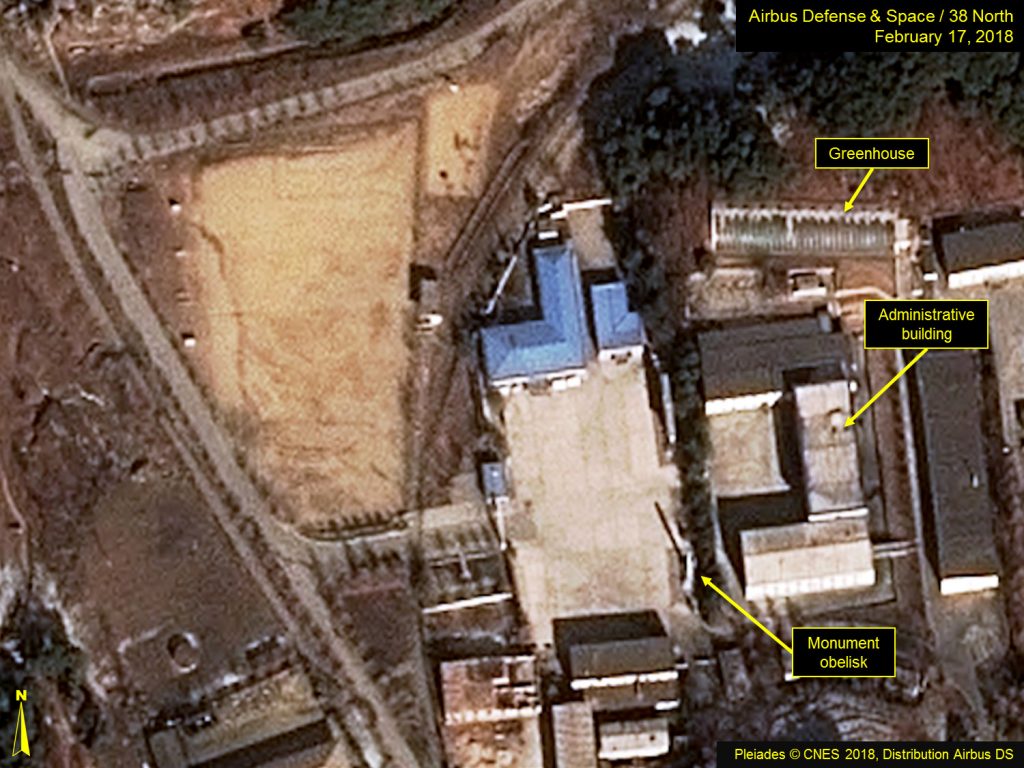 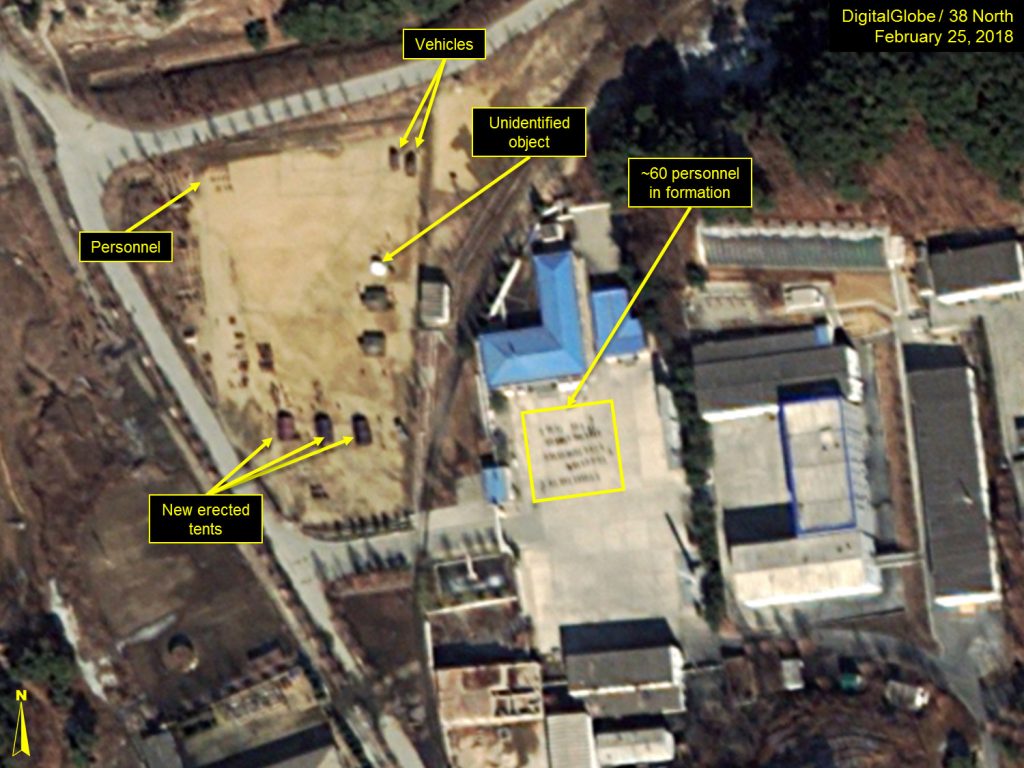 Figures 9-11. Groups of personnel observed throughout the complex.

The unique “specialized” rail cars and three specialized depressed-well flatcars that were present in mid-February at the Pungang-ni Rail Yard (the main rail yard serving Yongbyon) are now gone. (Figure 12-13) The exact purpose of these unique rail cars remains unclear, although they have been observed at both the Radiochemical Laboratory and the southeast rail yard during previous reprocessing or refueling campaigns. However, there are no other means to verify that such activities have recently occurred.

Figures 12-13. Specialized rail cars observed on February 17 are no longer present at facility. 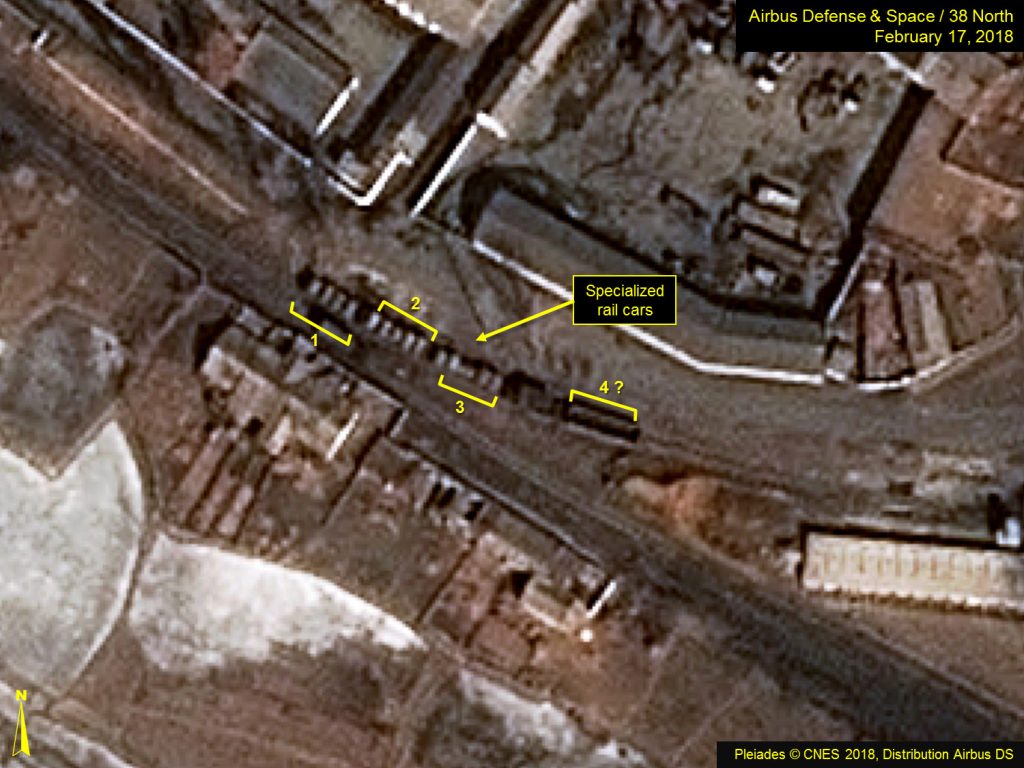 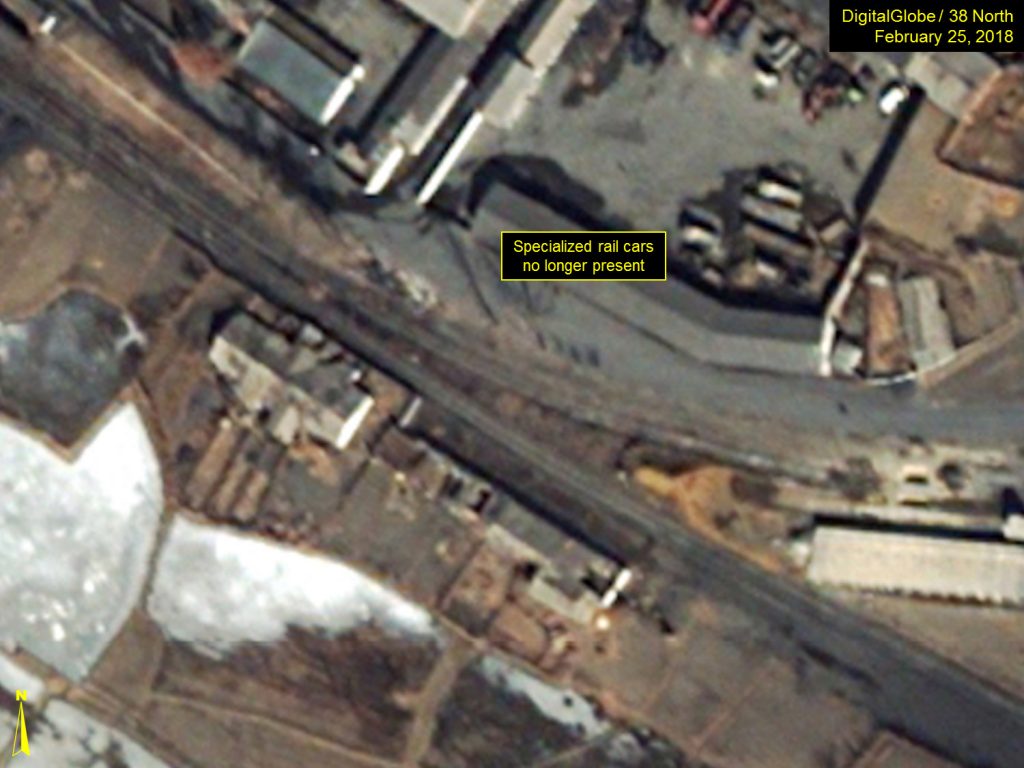