President Donald Trump on Sunday, during an address to state governors, said, “I’m not in a rush, I don’t want to rush anybody, I just don’t want testing. As long as there’s no testing, we’re happy.” For those hoping to see a concrete agreement with North Korea that verifiably denuclearizes North Korea in the near future and in one comprehensive step, Trump’s statement comes as a disappointment. However, the value the president assigns to the absence of nuclear and missile testing is not misplaced and supports a phased approach to denuclearization. Without additional testing, North Korea’s capacity to threaten the United States with nuclear weapons is unreliable and questionable.

While the administration claims the absence of testing as a successful outcome of the engagement process, North Korea has declared a moratorium on nuclear and missile testing. Kim could change his mind at any time and immediately resume testing of long-range missiles. The administration should therefore use the upcoming US-DPRK summit in Hanoi to negotiate a formal, verifiable long-range missile test ban with Pyongyang. Such a ban, if implemented fully, would limit the viability of North Korea’s long-range strike capacity, strengthen US security commitments to South Korea and Japan, and protect American lives. It would also provide momentum for bolder, more ambitious steps toward a nuclear-free Korean Peninsula.

Ballistic missile development requires flight testing. Without extensive testing, neither the missile’s designers, nor its end-users, can have a high degree of confidence that the new system will perform as expected under a full spectrum of operational conditions. The number of flight tests needed for the development of a country’s first- or second-generation strategic missiles depends on the level of confidence required by the end-user. The US and Soviet Union conducted roughly three dozen flight tests for their respective first- and second-generation long-range missiles. France’s strategic missiles were subjected to roughly two dozen flight tests, and although publicly available test records seem incomplete, China appears to have relied on about a dozen test launches. North Korea has conducted only two test flights of its Hwasong-14, and only a single launch of its more capable Hwasong-15 intercontinental ballistic missiles, or ICBMs.

How Many Flight Tests are Required?

There is no fixed answer to this question, as it is partially subjective and depends on the missile’s design criteria, most notably the performance and reliability requirements as specified by the end-user. A detailed study of early-generation, long-range missile development in the Soviet Union and United States reveals interesting and consistent trends that illustrate what is required before a system is deemed combat ready. The flight-test records of 10 missiles have been evaluated here.[1]

On average, across nine of the missiles examined, the tests failed more often than they succeeded during the initial ten launches. As one might expect, the success rate over the second batch of ten tests improved to 74%. Overall, after 20 flight tests each missile performed successfully just 61% of the time. A deeper look at the available launch data indicates that consistent improvement in reliability begins after roughly 16 flight tests, on average, though the number varies across each of the nine systems.[2]

What Does the Past Tell Us About the Status of North Korea’s ICBMs?

Over a span of ten years, beginning in 2006, Pyongyang launched five three-stage, liquid-fueled Unha-type rockets attempting to place a satellite into low-earth orbit. The first three failed, and the fourth succeeded in orbiting an object, though the satellite was tumbling and inoperable. The fifth attempt succeeded in achieving an orbit, but the satellite appears to have malfunctioned. Failing three of five times is consistent with available data on similar systems. In 2016, North Korea test launched up to eight Musudan (Hwasong-10) intermediate range ballistic missiles (IRBMs), with all but one failing catastrophically. A year later, the first three Hwasong-12 launch attempts ended in failure; the subsequent three appear to have been successful, with the last two launches employing a standard, rather than highly lofted trajectory. The North Korean experience is reasonably consistent with the test histories experienced elsewhere.

The Hwasong-14 and -15 ICBMs appear to have broken the trend seen elsewhere and in North Korea itself. How does one explain the apparent successes of the first two flight tests of the Hwasong-14, and the only test of the Hwasong-15 ICBM? First, without access to telemetry and tracking data it is impossible to assess the overall performance or success of each ICBM flight test. In fact, there are no public reports indicating that North Korea positioned observation or telemetry-collection ships near the re-entry vehicle impact zones in the East Sea. Moreover, ground-based sensors stationed within North Korean territory to collect flight data would be unable to see the final 20 km of descent, where the most severe thermal and mechanical loads on the re-entry vehicle would occur. Hence, it is not possible to determine from available information if the missiles performed to their respective design specifications. Notably, we do not know, and North Koreans may not know, if the mock warheads survived re-entry into the earth’s atmosphere or impacted near their projected aim points. (There is some evidence that the re-entry vehicle for one of the tests did not survive, and that it likely did not contain a mock warhead.)

North Korea cannot be certain, therefore, that it has a survivable re-entry vehicle design for its ICBMs. And perhaps equally critical, North Korean engineers have not yet collected empirical data on the thermal and mechanical loads experienced during atmospheric re-entry of a warhead traveling at ICBM velocities of more than 7 km per second. Without such data, engineers will be forced to make educated guesses when establishing the nuclear bomb’s design criteria, particularly the ruggedness of the bomb design. Consequently, North Korea would need to over-design the re-entry vehicle’s protection systems and hope the bomb itself is rugged enough to withstand the extreme re-entry environment.

Second, the Hwasong–14 or -15 were flight tested using very steep trajectories, which minimized the ground-path distance traveled. Delivering a nuclear weapon to US territory requires a much flatter trajectory. The static and dynamic loads the missile experiences during the boost phase for a steep trajectory are quite different from those faced during a standard flight path. While the applied stresses of a standard trajectory can be modeled by North Korea’s engineers, without empirical flight data, considerable uncertainty remains, and must be factored into performance and reliability estimates of the missiles deployed without further flight testing.

The history of missile development elsewhere and in North Korea shows that there is no reason to conclude after so few tests that North Korea has an operationally viable ICBM capability. Many unknowns remain, and without additional testing Pyongyang’s leadership cannot be certain that its ICBMs would succeed more often than they would fail if launched during a crisis. Given that the North is likely to field a small number of ICBMs, perhaps six of each type (i.e., Hwasong-14 and -15) the risk that none of its ICBM warheads will reach the continental US is a real, finite possibility.

Figure 1 depicts the probability that at least one North Korean warhead strikes US territory under five potential circumstances, assuming no more flight tests are performed, and ICBM reliability is 0.4 (i.e., a success rate of 40 percent). The solid-blue curve shows that North Korea would need to launch three ICBMs to expect an 80 percent chance (i.e. a probability of 0.8) of landing an ICBM warhead on US soil, assuming the failure modes across the missiles launched are independent. If the failure mode for the Hwasong-14 or -15 missiles is systemic, affecting each missile launched, then obviously no missiles would reach US territory. There is a finite probability that a failure mode for ICBMs flown on a standard trajectory is applicable to all North Korea’s long-range missiles, as the Hwasong-14 and -15 have never been tested under such conditions. The curves shown in Figure 1 also assume the nuclear warhead is 100 percent reliable, which after just six test detonations may be an optimistic projection.

If one further assumes that US missile defenses have some efficacy against a small number of first-generation ICBMs, the odds of North Korean success in landing a warhead on US territory decline dramatically. To date, the Ground-Based Interceptors (GBIs) protecting the US homeland have an unimpressive test record, with only about half of the intercept attempts succeeding. If we accept that each interceptor has a 50 percent chance of destroying a North Korean ICBM, the probability of at least one Hwasong-14 or -15 striking the US homeland can be calculated and depicted by the dotted-blue line. In the case a single interceptor is launched at each inbound ICBM, North Korea must fire between seven and eight missiles to have an expectation that 80 percent of the time at least one warhead lands on US soil. Three ICBM launches are needed before Pyongyang could expect a 50 percent chance of success. Curves corresponding to the assignment of two and four GBIs to each incoming threat are also depicted. Current missile-defense doctrine calls for four interceptors committed to each threat missile. Under that condition, North Korea must fire about nine missiles to have a one in five chance that at least one warhead strikes America. In other words, Kim Jong Un would need to launch a substantial fraction of his ICBMs to have a modest expectation, about 20 percent, of one striking the US.

If North Korea more fully matured Hwasong-14 and -15 development by flight testing each more than a dozen times, a reliability of about 80 percent might be achievable. As shown by the solid-red line in Figure 1, doubling ICBM reliability to 80 percent provides nearly 100 percent chance of success when just two missiles are launched in the absence of missile defenses. If the standard practice of committing four interceptors to each ICBM is assumed, the seven North Korean missiles must be launched to achieve a 50 percent chance of striking the US. And only two ICBMs need to be launched to achieve the 20 percent chance of success, compared to the roughly nine launches of the 40 percent reliable ICBMs needed to achieve the same performance expectation.

Very clearly, it is in the US interest to prevent North Korea from further testing its Hwasong-14 and -15 ICBMs. The potential threat to the US homeland posed by Pyongyang’s ICBMs would be substantially reduced if no additional tests are conducted. The reduced threat to the US would help Washington more fully reassure its allies in South Korea and Japan that it will meet its security commitments. If a verifiable moratorium on long-range missile tests can be successfully concluded, the next step might include a ban on all missile testing, including the short- and medium-range missiles that threaten Japan and South Korea. Such a ban would substantially impede full development of the submarine-launched Pukguksong-1 and land-based Pukguksong-2. A flight ban would also severely degrade North Korea’s ability to perfect the terminal guidance systems for its Scud-type missiles, thus preventing the development of highly accurate short- and medium-range systems that would have military utility even when armed with conventional warheads.

Figure 1. The number of ICBMs North Korea must launch at the US to achieve a given probability of landing at least one warhead on US soil, assuming five distinct scenarios. The blue lines assume the reliability of North Korea’s ICBMs is 0.4, meaning that 40 percent of the missiles launched could be expected to perform as designed. The red lines assume the North Korean missiles have undergone additional flight testing and development needed to improve the expected reliability to 0.8, or 80 percent. The hashed lines assume four Ground-Based Interceptors, or GBIs, are assigned to each inbound ICBM, whereas the dotted lines assume just one GBI is committed to each incoming North Korean missile. 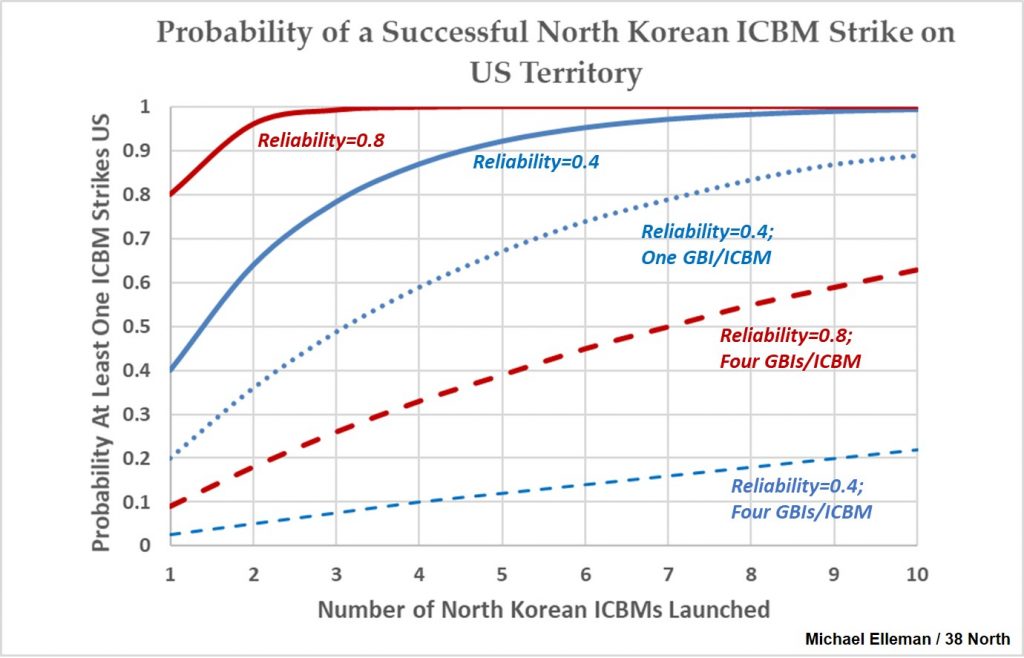