Commercial satellite imagery from July 21 indicates workers at North Korea’s largest container port have used shipping containers to create makeshift barriers between different areas of the dockside. This practice was first observed in April, and since then, two additional walled-in areas have been created. These actions are unusual for port procedures, but could be part of extreme precautions being taken to protect the country against COVID-19. It could also signal that North Korea is preparing for imports to increase in the near future.

Meanwhile, at the nearby petroleum, oil and lubricant (POL) storage area, construction is progressing at a slow pace on a new quay that will eventually connect to a future offshore POL transfer terminal.

On the eastern side of the dock at the Nampho container port, the wall of containers identified in our April 16 report remains in place. The containers are arranged to mostly enclose an area of eight containers by three containers, or approximately 320 feet x 120 feet (100m x 40m).

The purpose of this unique arrangement is unclear. It is located near a newly completed building, which measures 122 meters by 45 meters, or about the combined size of the four warehouses located in the western side of the container port. The building was completed early this year and is subdivided into numerous internal rooms, and is likely used for storage of goods.

Figure 3. Close up of containers along warehouse access route.

On the western dock, inside an area fenced off from the rest of the port, containers have been arranged to create a walled pathway that runs from the portside to four large warehouses.

The purpose for arranging containers throughout the dock in this way, essentially creating two open storage areas within the fenced area, is unclear.

Given the extreme precautionary measures North Korea has taken since January 2020 to prevent an outbreak of COVID-19, it is possible these containers have been arranged to provide physical separation of goods coming from overseas as they are transported to warehouses as part of quarantine and disinfection protocols.

The country’s borders have been essentially closed to the outside world since early 2020, although some limited cargo has been observed coming through the Nampho port. However, the practice of walling off areas on the dock with containers has only been observed since April, and while unusual, is similar to COVID-related protocols in other areas.

For instance, in Sinuiju, the Uiju Airport was repurposed earlier this year and now houses ten new warehouses with red, green or blue roofs. A new railway spur was also constructed that leads directly into the airport area, with new platforms located near the warehouses. This setup allows railcars from China to travel into North Korea and be directly transported to the airport where goods can be offloaded and undergo quarantine in the new warehouses. The airport has two layers of perimeter fencing for security.

If the container walls at Nampho are similar COVID-related protocols, it may indicate the port is preparing to receive a greater volume or greater frequency of goods in the near future.

The new POL quay, which will eventually terminate at a future offshore POL transfer terminal, has grown by around 150 meters since April. The quay has been under steady construction since late March and reached its current length in early June. Since then, little work has been observed. 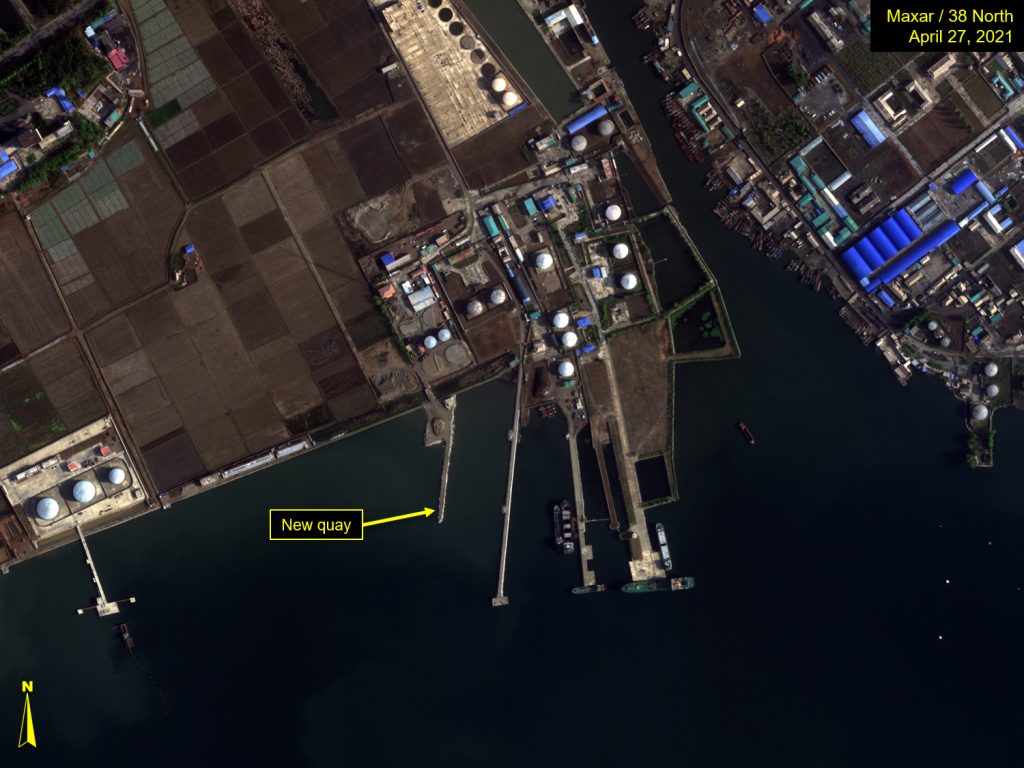 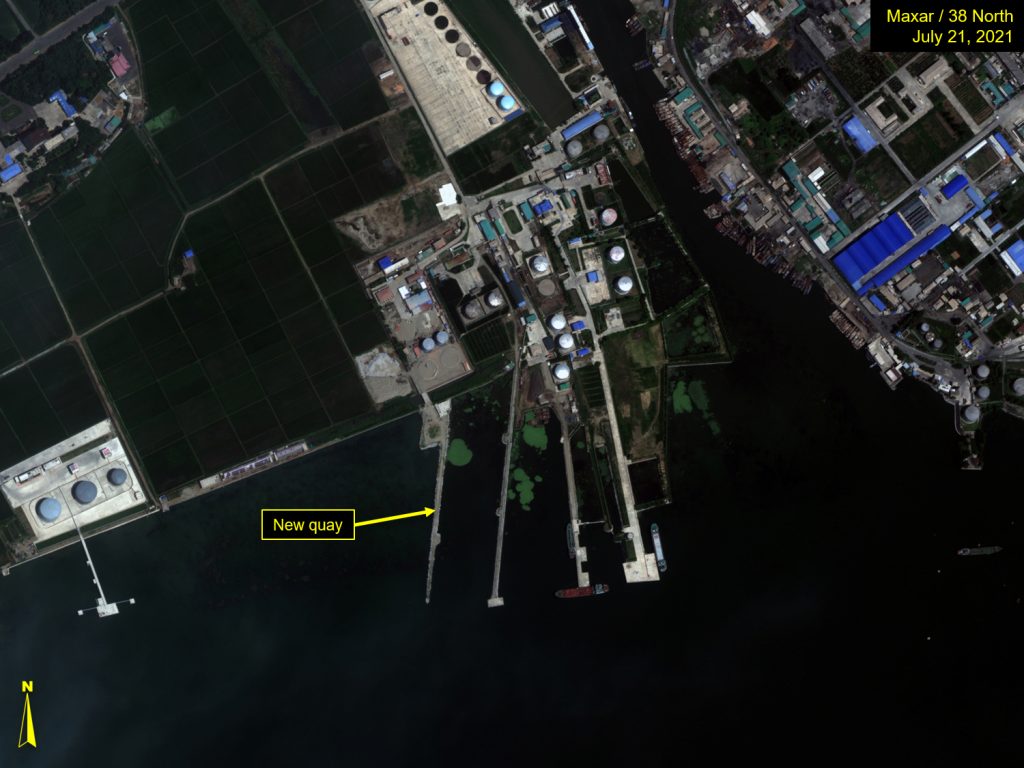 While the quay’s length is nearing completion, it still lacks the normal quay walls and the surface looks rougher than that of the nearby terminal quays. Around the head of the quay, construction materials are stockpiled, indicating that work remains to be done.