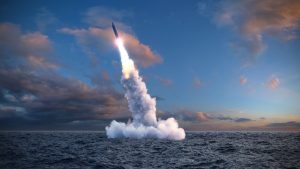 North Korea’s latest missile launches, including the launch of an intermediate-range ballistic missile (IRBM) over Japan on October 4 and two short-range ballistic missiles (SRBMs) on October 6, provide a stark reminder of the numerous missile programs it is pursuing. This year alone, despite a short summer respite, Pyongyang has launched 43 missiles through October 6, including two unspecified cruise missiles and 41 ballistic missiles from short range up to intercontinental range. Although a great deal about North Korea’s missile program remains unknown—particularly the numbers of new missiles to be deployed and their accuracy—there are two key security implications for the United States, the Republic of Korea (South Korea or ROK) and Japan.

However, despite these improvements, the fundamental military and strategic situation remain: the US-ROK alliance retains clear conventional military superiority on the peninsula, the US retains overwhelming nuclear superiority over North Korea, and both of these things will almost certainly remain the case. Maintaining this situation, however, will require continued efforts to uphold US military and political credibility, alliance solidarity and South Korean and Japanese conventional military capability. It also will require ongoing efforts to blunt the effectiveness of North Korean missile attacks through active and passive defense measures.

In addition, North Korea showcased a new, solid-propellant submarine-launched ballistic missile (SLBM) even larger than the Pukguksong-5 missile in its 2021 military parades, which also has not yet been flight tested.

Assessing the cumulative impact of this series of activities is complicated by the fact that a great deal about North Korea’s missile program remains unknown. Moreover, most of what we think we know from open sources about North Korean missiles—especially the newer systems—comes from what the North Koreans themselves say and the photos and videos they release. (Interestingly, the North has not provided any information on the ten launch events, involving 24 missiles, since April 16. On October 6, it did characterize recent launches as “the just counteraction taken by the Korean People’s Army against south Korea-U.S. joint drills escalating the military tensions on the Korean peninsula.”[4])

Among the key unknowns are:

The overall dimensions of the threat posed by North Korea’s missile force are difficult to judge in the absence of this information, especially how many targets can be engaged (especially in the US homeland) and the full conventional warfighting effectiveness of Pyongyang’s theater missile force.

The resumption of IRBM and ICBM testing underscores the importance of North Korea’s relatively recent capability to deliver nuclear warheads against Guam, Hawaii and North America. In conjunction with its 25-year-long ability to threaten South Korea and Japan with nuclear weapons, this bolsters North Korea’s ability to:

The testing seen this year also reminds us, however, that while the North probably regards its ICBMs as sufficiently reliable for the above purposes, they are not highly reliable. This is due to:

As the threat to the US homeland increases, the risk increases that (a) the North could perceive it has increased freedom of action; and (b) Japan or South Korea can perceive the US nuclear umbrella is no longer sufficiently credible and decide they need an independent nuclear force.

This year’s tests provide further evidence of three attributes of North Korea’s new, solid-propellant SRBMs that collectively have the potential to substantially improve Pyongyang’s conventional warfighting capabilities. If deployed in large numbers, the four types of new missiles together will allow more intense conventional missile attacks, and the ability to tailor particular types of attacks to particular missile types.

First, this year’s tests underscore that these missiles are reliable and making progress toward deployment. For instance:

Second, the tests continue to imply that these systems have improved accuracy compared to the earlier Scud-class and KN-02 SRBMs, thus allowing more effective strikes against US and ROK targets on the peninsula with fewer missiles per target, and allowing more targets to be attacked for a given force size.

Third, the testing also emphasizes that the new SRBMs use flight profiles that provide more options to evade and attack US and ROK missile defenses, and allow the North to do so with fewer missiles (thus making more missiles available for other targets).

Recent improvements in North Korea’s missile force capabilities, however, are not enough to change the fundamental military and strategic situation regarding the peninsula. This is for several reasons, including:

Thus, despite North Korea’s missile threat to the US homeland and improving conventional SRBM capabilities, the US-ROK alliance is still able to deter North Korea—just as the US and its allies successfully deterred the Soviet Union under conditions of US conventional inferiority and nuclear parity. Maintaining this deterrence, however, will require continued efforts to uphold US military and political credibility, alliance solidarity and South Korean and Japanese conventional military capability. It also will require ongoing efforts to blunt the effectiveness of North Korean missile attacks through active theater and homeland missile defenses, as well as passive defense measures such as hardening, dispersal, mobility, decoys and camouflage.