It’s been a couple of months since railroad traffic opened again between China and North Korea. Although it isn’t very much time to fully evaluate such a drastic change, we can see some interesting price movements on the country’s markets. (Click to see the full graph.) 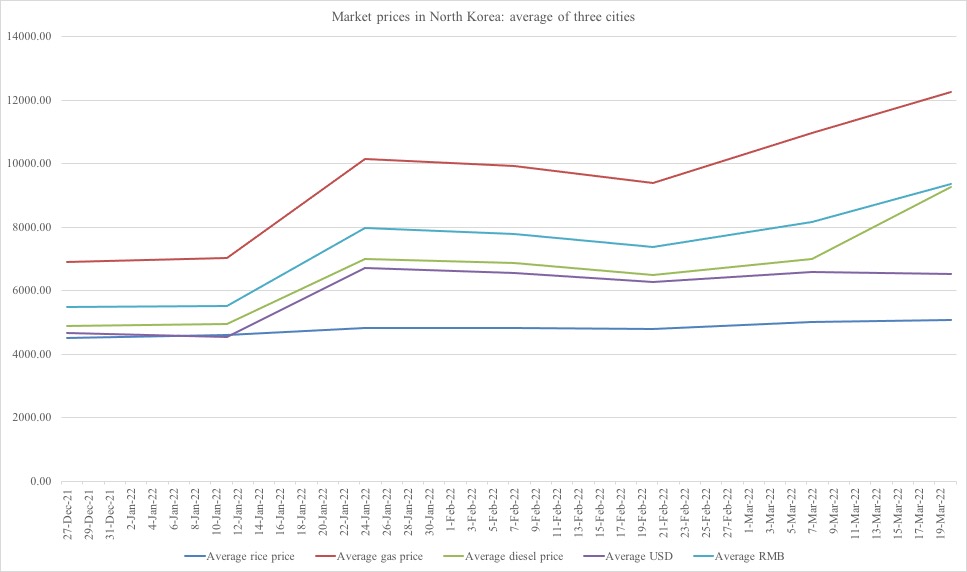 First, and unsurprisingly, foreign exchange rates have gone up drastically. This makes perfect sense, since news of trade resuming would make more North Koreans want to hold foreign currency, to import and purchase goods from abroad.

Second, both diesel and regular fuel prices have gone up, and quite drastically. As Daily NK notes, the fuel price increase in North Korea is much higher than that of global oil prices. This is also logical, since businesses have likely increased their purchases of fuel in anticipation of increased demand as border trade increases. I’m not sure, however, that the entire magnitude of the increase can be explained this way, since in some localities, prices have more than doubled. Diesel prices have also skyrocketed, which is somewhat unusual since gas and diesel prices tend not to fluctuate this much together. (Gas prices are some of the most volatile on North Korean markets and often fluctuate with the geopolitical situation.)

Price hikes in China, on both diesel and gasoline, are likely a strongly contributing factor. Another significant factor, reported by Daily NK in the article above, is likely moves by the North Korean government to restrict private fuel sales, perhaps leading hoarding by sellers. The rapidly rising exchange rate also makes fuel more expensive, but fuel prices have risen faster than the exchange rate.

Increased supply from China may come to stabilize fuel prices, but given global oil price increases, such deliveries to North Korea are increasingly costly for China as well.