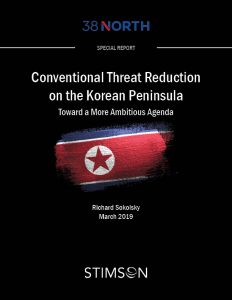 At the June 2018 Singapore Summit, the US and North Korea agreed to build a “lasting peace and stability regime” on the Korean Peninsula. However, no progress was made toward this goal at the Hanoi Summit last week. It is hard to visualize an enduring peace between North and South Korea that does not include robust measures to reduce the threat of conventional war and to downsize the North’s military infrastructure. The bandwidth of the US government, the media, pundits and nonproliferation experts, however, has been soaked up by North Korean denuclearization; scant attention has been paid in Washington to conventional threat reduction and the demilitarization of North Korea. The failure of the Trump-Kim summit to reach agreement on measures to build a comprehensive peace and security regime on the peninsula heightens the importance of the two Koreas making further progress in their efforts to lower tensions and reduce the threat of war.

This 38 North Special Report series sets out a forward-looking agenda for conventional threat reduction and the demilitarization of North Korea. The first part examines the contribution that robust confidence building measures (CBMs) and conventional arms control could make to achieving enduring peace and stability on the Korean Peninsula. The next installment in the series discusses alternative futures for the US-ROK alliance in the context of greater progress toward building a lasting and comprehensive peace and security regime for the peninsula. The final two pieces examine the related issues of North Korean defense conversion and military demobilization, both of which could assume greater importance if North and South Korea make further progress on conventional threat reduction on the peninsula.

The author would like to thank Yuri Lee for her invaluable research assistance and the US and South Korean participants in a two-day workshop on The Demilitarization of North Korea held on December 3-4, 2018 at the Henry L. Stimson Center in Washington, DC.


Download "Conventional Threat Reduction on the Korean Peninsula: Toward a More Ambitious Agenda," by Richard Sokolsky