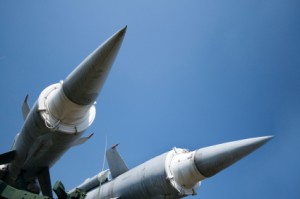 News media descriptions of North Korea’s commercial activities often claim that Pyongyang sells large numbers of ballistic missiles abroad. Some press reports even assert that North Korea brings in hundreds of millions of dollars, if not more, on Scud, Nodong, or Musudan missile sales in any given year.

These stories are, in the best case, years out of date. Seized arms shipments tell the tale. Since the UN Security Council adopted Resolution 1874 in June 2009, expanding the authority of all nations to seize weapons shipments from North Korea, at least four such incidents have taken place—an unprecedented pace. While these events attest to North Korea’s brisk arms commerce, none involved ballistic missiles.

In July 2009, authorities in Sharjah, part of the United Arab Emirates, found ten containers of conventional weapons and related components and materials aboard the cargo ship ANL Australia. Investigators concluded that the containers had been headed from North Korea to Iran. In September, after the cargo ship MSC Rachele pulled into the port of Busan, South Korea, a search found four containers of nuclear-biological-chemical protective clothing from North Korea, apparently meant for Syria. In November, a similar scene played out in the port of Durban, South Africa. Inside two containers found aboard the cargo vessel Westerhever were spare parts for Soviet-made battle tanks of 1950s vintage. North Korea had been sending them to the Republic of Congo. In December, another conventional arms shipment to Iran was stopped, this time on an airplane that had made a stop at Don Mueang Airport in Bangkok, Thailand.

(According to one account, a fifth incident, involving a shipment to Syria stopped at the port of Piraeus in Greece in September 2010, uncovered “metal and pipes” that possibly could be used in the making of “missile launchers.” This vague description could refer to components of rocket artillery launchers. The nature of this event has yet to be clarified.)

What this spate of recent arms seizures doesn’t tell us is what the pattern of North Korean arms shipments used to be like, and whether exports of ballistic missiles were once more common. Fortunately, there is a body of evidence available on the subject, consisting of public, unclassified U.S. government data. These data, which appear in annual reports on the arms trade issued by the Congressional Research Service, do not explicitly connect North Korea to any particular delivery of weapons. Nor do they identify exactly which countries received what weapons. But with careful analysis and comparison to other public information, it is possible to reconstruct approximately how many ballistic missiles North Korea delivered to what region of the world—and sometimes which country—in any given year.

This reconstruction, which can been viewed in an article in the current issue of Nonproliferation Review, suggests that North Korea has been the leading exporter of ballistic missiles since it entered the world market in 1987, followed by the Russians and Chinese. The known recipients of North Korean missiles are Iran, Syria, Egypt, Libya, Yemen, the United Arab Emirates, and Pakistan. But the delivery of complete missiles is, for the most part, history. Over 80 percent of these deliveries took place before 1994.

Still, the decline in shipments of complete missiles did not spell the end of North Korea’s missile trade. Another body of data, mostly consisting of news media reports describing seized shipments, indicates what replaced them: the delivery of missile parts, materials, and production equipment. Five out of the seven buyers of complete North Korean missiles—Iran, Syria, Egypt, Libya, and Pakistan—appear to have mostly shifted to buying their own missile factories, along with many of the parts and materials to use in them.

By the early 2000s, the seizure of parts, materials, and production equipment had also started to slow. North Korea’s customer base seems to have begun to contract rapidly at this point. The reasons for this change aren’t completely clear, but a few incidents do stand out. Collectively, they point to the role of Western pressure on importers to cut ties with North Korea. In 2001, Pakistani ruler General Pervez Musharraf removed Dr. A.Q. Khan from control of Khan Research Laboratories (KRL), the Pakistani institution that dealt directly with the North Koreans. In late 2002, after the Spanish Navy stopped a North Korean Scud shipment in the Gulf of Aden, the United States wrested a promise from the government of Yemen to discontinue buying missiles from Pyongyang. A year later, the American and British governments announced an agreement with Libya to terminate its nuclear and ballistic missile programs, both of which had received aid from North Korea.

Other information, including unclassified intelligence community reports to Congress, now indicates that North Korea’s missile trade consists largely of collaborative development with Iran and Syria. These three countries share an interest in upgrading their ballistic missile arsenals both qualitatively and quantitatively so as to be able to overcome missile-defense deployments.

Despite the best efforts of Western states to separate missile buyers from North Korean sellers, one new buyer may have appeared: Burma (also known as Myanmar). The reconstruction of missile exports based on the CRS reports, which runs through 2009, contains no deliveries of complete missiles to Asian states. However, there are reasons to suspect that North Korea may have started transferring missile production equipment, parts, and materials to Burma.

In 2009, the websites of exiled Burmese opposition groups unveiled the text and accompanying photographs of an internal report documenting a visit by a senior Burmese general, Thura Shwe Mann, to Pyongyang and Beijing. (An English translation is available.) On October 26, 2008 in Pyongyang, the report states, General Shwe Mann and his North Korean counterpart, General Kim Kyok-sik, signed a Memorandum of Understanding that included “joint efforts in modernizing weapons and military equipment.” Two days later, the Burmese delegation spent over an hour at the “Surface to Surface Missile (SCUD Missile) Factory,” where they “observed in detail how missiles were produced.”

Also in 2009, Japanese authorities arrested one North Korean and two Japanese businessmen for shipping advanced machine tools to Myanmar, apparently at the behest of a North Korean front company in China. These tools—including a magnetometer and cylindrical grinders—could be used for the production of specialized magnets used in missile guidance systems.

Most recently, in June 2011, the New York Times reported that the U.S. Navy had blocked a “shipment of suspected missile parts” from Burma to North Korea in May. A similar shipment is alleged to have successfully reached its destination in 2010.

But if Burma is, in fact, the newest buyer of North Korean missile technology, it’s the exception within an overall trend of decline. Ironically, North Korea’s very achievements as a proliferator of missile technology may end up doing as much as anything to put it out of business. Under A.Q. Khan, Pakistan’s KRL is said to have marketed its own version of the North Korean Nodong missile, albeit without any known successes. According to the latest annual report to Congress, Iran has also begun marketing missiles. Syria, too, is becoming more independent as a missile producer, enough to become a proliferation concern itself. In fact, Syria already stands accused of transferring relatively advanced Scud-D missiles to Hezbollah, the armed group that now controls the government of Lebanon.

Taking into consideration these and other, better-established missile exporters, particularly Russia, there might even be more potential suppliers than buyers in the world market. The prospects for Pyongyang’s slice of the market, though once impressive, continue to diminish.