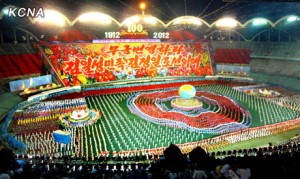 August 1, 2012, marked the premier of North Korea’s Arirang Mass Games. It is the country’s main tourist draw and a key event for inspiring support and fidelity to the government’s worldview. This is the tenth and final year of the festival, which will close with “The China Chapter” for a fifth time. The China Chapter is a curious addition that doesn’t fit the rest of the show’s narrative, but says interesting things about how the Korean Worker’s Party is thinking about itself and its relationship with its people.

The Arirang performance is held annually from August to October and boasts a staggering 80,000 performers each night and 2 million audience members over its three-month run. The details of each year’s Arirang vary slightly, but the basic format and themes remain constant. It is carefully designed not only to impress the viewer with its complexity, precision and splendor, but also to convey a story.

It is quite literally the official national narrative bundled into a 90-minute spectacle. The games chart the history of Korea from the colonial era to the present day and into an imagined future. The narrative begins with images depicting the story of the classic Korean song and the Mass Games’ namesake, Arirang. The hauntingly beautiful piece tells the melancholic tale of two young lovers who must tragically separate. In the Mass Games, this acts as a none too subtle metaphor for the national tragedy of division.

Arirang is divided into four chapters and several subchapters. The first chapter is called “The Arirang People.” It starts darkly, with costumes, movements and lighting all clearly meant to evoke the melancholy of the colonial era. Then comes the birth of “Korea’s Star”—Kim Il Sung—who liberates the people, founds the DPRK and creates a strong country. The chapter closes with a militaristic display.

The second chapter is called “Military First Arirang” and again begins ominously with waves crashing and darkness encroaching upon the scene. Because the nation is protected by Kim Jong Il’s military first policy, however, children are free and happy to lark about. This is represented in a subchapter entirely performed by kids riding unicycles while jumping ropes among other feats of dexterity. The remainder of the chapter is devoted to Korea’s successes in agriculture and industry.

The third chapter is titled “The Happiness of Arirang” and is a somewhat psychedelic, acrobatic affair, meant to reference the coming socialist utopia. The final subchapter is titled “Only One Heart” and demonstrates the unity of North Koreans as they pursue this goal. This transitions into the final chapter, “Unification Arirang,” which demonstrates the longing for unification.[1] During the final stirring scenes, a narrator recites with trembling emotion the tragedy of his people, appealing to “the world’s conscience” not to ignore the plight of a divided Korea. Fade to black. Curtain drops. House lights come on.

Or at least it feels like this should happen. Say what you will about this view of history and current affairs, but when Arirang is performed in this way the story itself is stirring. It takes the viewer on an emotional ride that ends with an appropriately heartbroken inconclusiveness.

But for four of the past nine performances the show has continued after this point, ending with a “China Chapter” that doesn’t fit the unified narrative at all.

This tacked-on ending celebrates the “eternal friendship between China and Korea” and features Chinese dragons, pandas, acrobats and other lighthearted cartoonishness on the performance floor. In 2001, the last year that Mass Games were not titled “Arirang,” this was done to honor Jiang Zemin’s visit to Pyongyang. A similar finale was concocted for 2009, when Wen Jiabao visited North Korea and marked 60 years of PRC-DPRK relations. It was kept for 2010, when Hu Jintao was supposed to visit, but cancelled in the wake of the Cheonan sinking.

This special ending seems to have been created and performed with Chinese politicos in mind. Until last year, that is.

Even though there was no overtly high-political reason for the somewhat disjointed segment—which sometimes is performed in the middle as well—it curiously remained in 2011. The performance opens with the Internationale, then segues to a well-known Chinese song which gets the Chinese tourists in the audience singing along quite merrily. It features the usual Chinese cultural icons on the main floor.

Behind them the massive 20,000-strong card flipping section showed images of skyscrapers rising and technological achievements. They also spelled out phrases such as “China-Korea friendship is eternal,” and “Without the Communist Party, there would be no new China.” The messages about development were spelled out in both Chinese and Korean. The Chinese are left to read this as an appropriate gesture of respect towards a current ally and former suzerain.

The Korean audience—who are the vast majority of viewers despite the increase in tourism—are well aware that China is becoming richer and richer. In Pyongyang, more and more international contact is China related. Travel abroad for North Korean elites almost always goes through China. In mining communities they see more Chinese businesses moving in. In Rason, they see investors and gamblers coming from China (there is large casino-resort there); elsewhere on the border, Koreans look across and see more and more cars, skyscrapers and electricity. They know China is getting rich.

This chapter then, explicitly encourages the audience to see China as both friendly and as a successful model that could be an option for Korea. One party “socialism” is paying dividends in the PRC and the people of the DPRK might reasonably expect something similar in their country.

There are a few reasons why the North Korean government is making this suggestion now. The first is that songun—military first—has earned the country nuclear-power status. This was at great cost, as the citizenry know all too well, but now that North Korea has the ultimate deterrent, it can and should focus on the economy.

Over the last year or so, stretching well back into the conclusion of Kim Jong Il’s rule, this has been the implicit and sometimes explicit message in North Korea’s media. The New Year’s Joint Editorial—North Korea’s key message about upcoming policy changes—talked more about improving quality of life in the 2010 and 2011 iterations than ever before.

Importantly, after Kim Jong Il’s death, it was for the most part business as usual. North Koreans did not see a repeat of the general economic shutdown that took place to mourn Kim Il Sung in 1994. The first major political rally in Pyongyang after Kim Jong Il’s funeral was entirely focused on messages about the economy and light industry.

Four months later Kim Jong Un gave his first public speech. He gave plenty of respect to the military and military-first politics, but he also promised the people “would never have to tighten their belts” again. So promises are being made. If they are kept, one might see a degree of faith restored in the North Korean leadership. If they are not, public trust will continue to erode.

Last week, the Arirang Mass Games 2012 edition premiered. According to Koryo Tours, this will be the very last one, with something different to take its place in the future. This final Arirang kept the China chapter, affixing it more firmly in people’s memories of the event. Of course, promises and agenda-setting in the arts and media don’t make for an actual successful development or reform policy. But the fact that they are being made suggests that aspects of the China model are at least on the table.

[1] Chapter titles taken from the 2005 performance of Arirang.