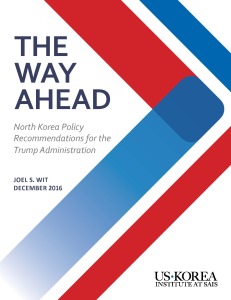 North Korea conducted its fifth nuclear test in September 2016 and over 20 ballistic missile tests this past year, highlighting the failure of US policy to stop the growing security threat posed by a hostile Pyongyang. As current US policy toward North Korea has reached a dead end, the incoming administration must recognize that maintaining the status quo will only worsen conditions on the Korean peninsula and in Northeast Asia.

This paper evaluates three new options the next administration might consider: an Iran-style sanctions campaign, preventive military strikes and coercive diplomacy. US strategy toward North Korea has previously emphasized either diplomacy or confrontation, but has yet to integrate the two tracks with significant incentives to secure US objectives and significant disincentives to punish the DPRK if it rejects a serious and credible offer of negotiations. While it is uncertain if the United States can achieve its preferred outcomes with North Korea by adhering to this hybrid approach, Washington can no longer afford to ignore Pyongyang.

Download the report “The Way Ahead: North Korea Policy Recommendations for the Trump Administration,” by Joel Wit.

For additional analysis regarding opportunities for the incoming administration to negotiate with North Korea, see “Can Trump Make a Deal With North Korea?” by Joel Wit and Richard Sokolsky.