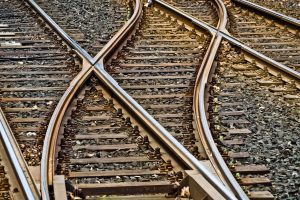 A JoongAng Ilbo juxtaposition caught my eye. Prompting, you might say, a train of thought.

The top two stories in South Korea’s leading daily (online English version) on December 10 were 1) a rail accident in the ROK northeast; and 2) whether there is still time for Kim Jong Un to visit Seoul this year as planned. Substantively unconnected, but the symbolism is rich.

On December 8 the 0726 bullet train from Gangneung to Seoul—a line less than a year old, built for the Pyeongchang Winter Olympics—derailed at 103 mph, minutes after setting out. Nobody died, miraculously, though 15 passengers were hospitalized for minor injuries.

Why did this train jump the tracks? Not to jump the gun, but there are two main theories. (Note that these could be complementary—if hardly complimentary—rather than either/or.)

Technically it all sounds very simple, if appalling. The derailment happened at a junction. The points were set wrong, but a faulty signal failed to warn the train driver.

How could that happen? Korail, the Korean Railroad Corporation and national railroad operator in South Korea, does seem to have issues. Three days earlier, premier Lee Nak-yon rebuked the state-owned service after two other incidents. Transport minister Kim Hyun-mee visited Gangneung to apologize for “yet another accident,” which she said shows “how imprecise operations have been at Korail.” An interesting adjective to choose.

Opposition lawmaker Hong Chul-ho has tallied 661 accidents since 2013, 109 involving KTX trains. Though most were on former President Park Geun-hye’s watch, Hong’s Liberty Korea Party was quick to blame the incumbent, Moon Jae-in. LKP spokesperson Song Hee-gyoung claimed that a third of Korail’s top management are placemen of the ruling Democratic Party (DP), with “little experience or understanding of railway operations.” Korail’s now ex-CEO, former lawmaker Oh Young-sik, was one such “parachute appointment”: a Moon aide with no background in transportation. Appointed only in February, he resigned on December 11.

The ruling camp does have a counter-argument. Under Park’s war on bureaucratic red tape, state enterprises saw their budgets cut. Korail had to outsource some maintenance functions, which along with less money may explain why standards—and trains—are slipping.

What has all this to do with North Korea? There are some direct implications. Top DPRK figures took the new KTX (South Korea’s high-speed train) to Pyeongchang earlier this year. What if it had derailed then?

Nor does this sit well with ROK ambitions to rebuild DPRK railways. The North may yearn for locos that can “do the ton”—but not if they crash. However, this article is mostly not about literal inter-Korean railway cooperation, fascinating as that is. We’re traveling with a metaphor here.

The big question is the one posed in my headline. As 38 North readers know, all is no longer plain sailing—sorry, smooth-running—in the peninsula’s peace processes. That plural is key.  More than one thing is happening, or maybe not happening, or no longer going very fast. The vagaries of US-DPRK relations are familiar but my focus here is chiefly on the peninsula.

Like a North Korean train, which is prone to creak and break down, inter-Korean relations are not so much jumping the rails as grinding to a halt, fast. Perhaps the blistering pace they set at first—three summits in six months—was not sustainable indefinitely. (The same goes for President Moon’s initially stellar approval ratings, but that’s another story.)

Three summits this year were supposed to become four. There now seems no chance that Kim Jong Un’s vaunted visit to South Korea will happen this month, as scheduled. Optimists told us that no news could be misleading. Pyongyang would insist that this trip be kept top secret for security reasons, until the young marshal suddenly jets into Jeju or Seoul or wherever. (Or by rail? Somehow, I doubt we’ll see that famous armored train rolling across the DMZ.)

As feverish rumors swirled in Seoul of dates and likely locations, Unification Minister Cho Myoung-gyon told the National Assembly on December 5 that “nothing has concretely been discussed” regarding Kim’s visit and schedule. I believe him, not least because Kim’s cold feet are far from the only instance of a marked deceleration in many aspects of inter-Korean relations lately. (Military matters are an exception; more on that below.)

Take family reunions. Easy enough to organize, with no breach of sanctions. August’s tearful scenes at Mt. Kumgang were the first of such in three years. Soon after, Moon and Kim signed the Pyongyang Declaration. Inter alia they committed to “strengthen humanitarian cooperation to fundamentally resolve the issue of separated families,” including a permanent facility at Mt. Kumgang and arranging video meetings and messages “as a matter of priority through inter-Korean Red Cross talks.” Erm, what Red Cross Talks? And why are no further reunions planned? Winter isn’t the ideal season, but at least a schedule could be set for spring.

Another example is the new permanent inter-Korean liaison office at Kaesong. When this opened in September, Minister Cho gushed that the two sides could “directly discuss issues 24 hours, 365 days.” But they haven’t. The joint heads were supposed to meet weekly, but this immediately slipped to monthly. There just isn’t that much to liaise about until inter-Korean economic cooperation gets off the ground. They last met on December 7, amid speculation that they would discuss “That Visit.” Only, they didn’t.

Back to our train of thought. Granted, crawling to a halt is different from jumping the rails. But the result is much the same. This train ain’t moving, or hardly. What has gone wrong?

This is where I find the railway metaphor rich. A junction with the points switched wrong? One track, familiar, connects Seoul to Washington. Another, the track less taken, points to Pyongyang. Can Moon ride both sets of rails simultaneously, without derailing? Tricky.

Gangneung’s communications failure also strikes a chord. The driver didn’t know the points were set wrong. Between the Koreas, or rather the triangle they make with the US, who gets to know what is more complex—and any failures are less technical than political.

Reuters recently alleged, plausibly, that the Moon government has seen heated debates about how much to tell Uncle Sam. The latter, incensed at being kept out of the loop, insisted on a formal bilateral working group. This has been busy: convening first in DC on November 20 and then by video link, with a third meeting due this week when the US special representative on North Korea policy, Stephen Biegun, pays his second visit to Seoul. (Four months into the job, he has yet to go to Pyongyang or meet with any DPRK representative.)

If the foe won’t talk, at least allies can liaise. But the political crux won’t go away. Is Seoul out of line if it doesn’t clear every last detail of its outreach to Pyongyang with Washington, or at least give full prior notification? Or is South Korean sovereignty at stake here? This issue of course enmeshes with sanctions, which further constrain Moon’s freedom of maneuver.

Parachute appointments? There is an analogy here too. Just as political appointees may not grasp the full technical processes and aspects of such concepts as denuclearization and demilitarization, the ROK military—some, anyway—may fret about the security implications of the push for peace; especially the no-fly zones and other steps agreed to at the Pyongyang summit. As those are very much driven by political goals, is there a risk of compromising military preparedness? I am reassured by the newish Defense Minister Jeong Kyeong-doo’s recent call for “unshakable” readiness. But this aspect has to be kept in mind.

Also relevant is the contestedness of politics. Just as conservatives and liberals quarrel about whose policies weakened Korail such that accidents are happening, they are divided on the far more important issue of North Korea. Hawks and doves are poles apart, yet (as I said here before) Moon should try harder to build a bipartisan consensus on how to handle the North if he wants this process to be sustainable, especially now that budgets need to be approved.

Even minister Kim’s choice of adjective resonates. If Korail’s operations are “imprecise”—harsher terms could be imagined—then so, increasingly, is the Korean peace process. While appreciating the progress made in this energetic and welcome year of diplomacy, one begins to sense a loss of momentum and a certain vagueness. As with US-DPRK relations, the mood is good, which can’t be bad. But what exactly is this train carrying, and where is it headed?

Some readers may reckon it’s me who is off the rails here. Switching from metaphorical to literal railways, isn’t the peace train rolling along just fine? In unprecedented cooperation, joint North-South inspection teams recently surveyed the full length of the DPRK’s two main railway lines, up the east and west coasts. And December 26 will see a “groundbreaking ceremony” for both rail and road reconnection at Panmun, just north of the DMZ.

That’s fine, as far as it goes. Only right now it is going nowhere. The inspection trip apart—and even that was abruptly blocked at first by the UN Command, i.e., the US—no trains will actually run and no railways will get modernized any time soon, due to sanctions. This is symbolism without substance. We already have “denuclearization” without any actual denuclearization. This groundbreaking is equally nebulous, or at best aspirational. Talk of motion is just talk, not motion. The two Koreas are not actually about to do the locomotion.

Reverting to metaphor: Ultimately this comes down to who is driving. Putting Korea back in the driver’s seat has long been Moon’s ambition and one of his favorite metaphors, though I assume he had autos in mind rather than trains. Whichever, in a sense, he has succeeded. Compared to a year ago, the driver’s seat regarding the Korean Peninsula is now located firmly on that peninsula.

Yet despite all Moon’s laudable efforts, the Korean leader driving all this is not him, but Kim Jong Un. And if the train is not currently going forward very fast, or at all, that is because the man in Pyongyang has chosen to apply the brakes recently. We may hope he will revert to the accelerator soon, while praying that nothing happens to send the train off the rails.

But all this is up to Kim. He started it. It’s him at the controls, steering skillfully—if not always to our liking. He will soon give his annual New Year address. If, as I expect, this echoes the critical tone of recent lower-level DPRK commentary, there is a real risk that the peace train will wobble or even derail in 2019, unless all parties strive much harder to meet each other’s demands. Moon, the navigator and go-between, will have his work cut out next year to keep the train on track and chugging forward.