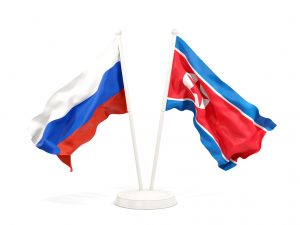 As Kim Jong Un prepares for his first summit with Russian President Vladimir Putin before the end of this month, speculation abounds about what the two hope to accomplish from this long-awaited meeting. The Russian press and official media will most likely hype this first summit as Kim displaying respect for Russia and underscoring Moscow’s importance as an active and respected participant in the resolution of Korean issues. Indeed, securing such recognition of this status has been and will continue to remain among Moscow’s principal objectives in on the peninsula and in Asia more broadly. But apart from the ever-present Russian obsession with status, there are important practical issues connected with economic projects and North Korea’s future negotiating strategy that are likely to be raised by both sides at this summit.

While there are clear benefits for Kim Jong Un to meet the Russian president, this summit is no less important for Putin. Moscow regularly invokes its long-standing friendship with Pyongyang and former role as protector and ally with Beijing. Russia is also determined to play a role in any Korean “peace process,” lest it be marginalized in the reconfiguration of regional security in Northeast Asia and Asia more broadly. Thus, claiming and being seen as owning a major role in the Korean question is vital to Russia’s Ostpolitik and domestic standing as an Asian or global great power. Therefore, North Korea may well succeed in gaining diplomatic and economic support from this summit to the degree that it can exploit Russia’s need to be acknowledged as a key player in Korean affairs.

What Pyongyang Wants from Moscow

The recent announcement that Kim Jong Un is seeking 100,000 tons of flour from Russia clearly shows hardships in North Korea’s harvest this year. Having to ask for such aid likely does not sit well with Kim, knowing how the shortages will be characterized as a result of misplaced priorities and economic mismanagement.

The hard times also underscore the effect of US and international sanctions, given Kim’s admission at Hanoi of their strong impact on the North’s economic activity. Thus, we can be reasonably certain that the request for flour will not be his only appeal for economic assistance from Russia. But getting Moscow to provide greater assistance and presumably measures to work around or be creative about implementing existing sanctions will not occur in a political vacuum: economic issues will probably be the core of Kim’s discussions with Putin and the Russian government.

Because the US will not provide sanctions relief without tangible North Korean steps toward denuclearization, Kim’s quest for ways to mitigate or circumvent current sanctions is deeply intertwined with the question of what diplomatic strategy he will pursue in the wake of the failed Hanoi Summit. Prior to Hanoi, Pyongyang obtained Moscow and Beijing’s overt support for its vision of phased, synchronous and reciprocal concessions between Washington and Pyongyang. But it appears that the Trump administration is stuck on its “all-or-nothing” approach to denuclearization and sanctions relief.

Moscow has made clear that it does not expect Pyongyang to agree to complete and immediate denuclearization, and actually prefers a long negotiation that builds mutual confidence with Washington and Seoul while Pyongyang perhaps even retains at least some of its weapons. Russian experts on Korean policy and Russian officials have said as much in Washington and in print. Indeed, one Russian analyst told the author that there are no concessions Washington could make that would induce North Korea to denuclearize.

However, Russia will not look with equanimity at a North Korean resumption of ballistic missile and nuclear testing. That outcome would not only raise tensions throughout the area, but also undermine Russia’s Korea policy, provide an impetus for both new US and UN sanctions, and justify still more US military deployments around North Korea such as the Terminal High Altitude Area Defense (THAAD) missile defense system Russia and China so deeply fear and resent. It seems that as long as Kim continues to suspend nuclear and long-range missile testing, Moscow will continue to support his demand for sanctions relief, a peace statement if not a treaty, and security guarantees in return for gradual denuclearization.

What Moscow Wants from Pyongyang

The focus of the summit from Moscow’s perspective will likely center on understanding Pyongyang’s denuclearization strategy and encouraging first steps that could move the needle with Washington, as well as carving out how and where Moscow fits into that equation. Moscow will also likely seek to obtain specific, irrevocable North Korean commitments to support Russia’s long-standing proposals for a Trans-Siberian and then Trans-Korean railway and gas pipeline and the use of Russian energy as the basis for a Northeast Asian “super grid” to provide the entire region with electric power. These programs are the economic cornerstone of Russia’s efforts to use its economic and especially energy power to carve out a place for itself as a recognized major power on the peninsula and in Northeast Asia. South Korea has long supported these kinds of projects, but North Korea has been a major obstacle to their realization in the past.

Politically, Moscow has also long championed the restoration of the Six-Party Process, seeing it as the best way to ensure Russia’s inclusion in any kind of process that will change regional dynamics. Russia was the “chairman” of a subcommittee devoted to the issue of creating a multilateral security mechanism for Northeast Asia, something it obviously wishes to be a part of.

Now that North Korea wants Russian support to help alleviate its domestic conditions and provide political backing for a negotiating strategy that can secure tangible gains for the DPRK, Moscow will likely seek quid pro quos in the form of North Korean concessions to jumpstart these stalled programs and enhance its role in future negotiations over Korea. This does not mean Kim will return from Moscow with a new negotiation program that is acceptable to the US. But it will likely become clearer to him what he can propose to Seoul and to Washington that will enable China and Russia to provide sufficient support to mitigate domestic hardships in North Korea and back whatever negotiating posture he opts for.

Neither Beijing nor Moscow has shown support for the US demand of North Korea for full, immediate, and verifiable denuclearization as a precondition for lifting sanctions. As such, we can expect Putin to be a sympathetic ear to Kim when they meet later this month, provided Kim refrains from actions that would agitate regional political stability and security. Certainly, economic cooperation and assistance are likely to be at the top of Kim’s agenda for this summit. However, we should not underestimate Moscow’s desire to appear vital to this process, and what it might be willing to do for Kim to ensure a role for Russia in ever-evolving Korean Peninsula affairs.