North Korea is dealing with a complex humanitarian emergency that has food insecurity at its core.[1] As of August 2022, both quantity and price data point to a deteriorating situation, made worse by the regime’s choice to self-isolate in response to the COVID-19 pandemic. Food availability has likely fallen below the bare minimum with regard to human needs, and on one metric, is at its worst since the country’s famine in the 1990s. The Kim regime has insisted on maintaining a failed economic model and remains committed to its nuclear program. For these reasons, the amount of diplomatic leverage conferred by aid may be minimal. Resolving North Korea’s chronic food insecurity would require, among other things, strengthening property rights, opening and revitalizing the industrial and service sectors of the economy, and embracing an export-oriented model. The regime, which fears internal competition and its own demise, has so far proved itself unwilling to pursue such reforms.

North Korea is no stranger to mass hunger. During the 1990s, the country suffered a catastrophic famine. Estimates vary widely, but it’s believed that anywhere from 600,000-1 million people, or about three to five percent of the prefamine population, died as a result.[2] North Korea’s chronic food insecurity is the product of decades of economic mismanagement and the internal and external policies of the incumbent political regime. Throughout its history, North Korea has pursued the goal of national food security through an economically irrational policy of self-sufficiency. In a narrow sense, the approach has worked in that most of the grain consumed in North Korea is produced domestically. However, achieving adequate agricultural output in North Korea’s unfavorable soils has, ironically, generated a heavy reliance on imported goods and left the country exposed to global shocks, diplomatic conflicts, and adverse weather.[3] Furthermore, the state’s arbitrary crackdowns on independent donju (entrepreneurs) blunt incentives and starve the economy of investment and growth.

North Korea responded to COVID-19 by self-isolating and severely limiting internal movement, which worsened its food insecurity. It used armed troops to close its borders to people and trade beginning in January 2020, which further disrupted an economy that was already under stress from chronic mismanagement and multilateral sanctions. The regime apparently failed to secure enough paper and ink from China to print its own money; since the fall of 2021, it has been forced to issue nearly worthless scrip, or money coupons, introducing confusion and distorting currency markets. Furthermore, as of June 2022, the border shutdown appears to have failed as the country admitted to there being a major outbreak of the virus amidst its malnourished, unvaccinated population. The war in Ukraine is an additional stressor by—at least temporarily—driving up global prices of food, energy and fertilizer. China’s recent decision to abandon its zero-COVID policies will likely increase global demand and may raise commodity prices further.

Due to the pressures of economic mismanagement, North Korea’s response to the COVID-19 pandemic and rising global prices, food insecurity once again appears to be deepening. In April 2021, in a speech to the Workers’ Party of Korea (WPK) Cell Secretaries, Kim Jong Un invoked the “Arduous March”—code for the 1990s famine. He returned to the food security theme in his December 2021 address before the WPK’s Central Committee, eschewing belligerence and emphasizing the central goal of rehabilitating the country’s rural economy and achieving national food security in the long run.

However, North Korea’s secrecy impairs an honest assessment of humanitarian needs. This piece aims to fill those gaps by triangulating quantity, price and other forms of evidence to assess the country’s food insecurity. The author of this paper has concluded that the grain balance estimates produced by the United Nations (UN) are implausible as they indicate that North Korea has avoided famine in only two of the last 25 years. The substitution of alternative estimates of local harvests and human consumption yields a more plausible yearly estimate, but even this more optimistic assessment indicates that as of the 2020-21 harvest cycle, the country’s food supply has probably failed to satisfy minimum human needs. Put simply, North Korea teeters on the brink of famine.

Given the opaque nature of the regime, any assessment of the North’s food supply would be subject to some uncertainty. For this reason, this paper relies on several different data sources to arrive at reasonable estimates. Figure 1 shows two alternative estimates of North Korea’s grain balance. One line is constructed from the UN’s Food and Agriculture Organization/World Food Programme (FAO/WFP) figures.[4] The other adjusts these estimates on both the demand and supply sides. On the supply side, the FAO production estimate has been replaced by the US Department of Agriculture’s (USDA) estimate of North Korean production, and the FAO’s estimate of imports has been replaced by the average taken from the UN COMTRADE, USDA and the FAO.[5] On the demand side, the FAO’s human consumption requirement is adjusted downward by 20 percent.[6] The adjusted estimate indicates that North Korea’s net grain balance has fallen below minimum human needs. It should be noted that the human needs consumption estimate is a lower bound in that food would have to be distributed equally across the population to avoid hunger, which is, practically speaking, inconceivable. 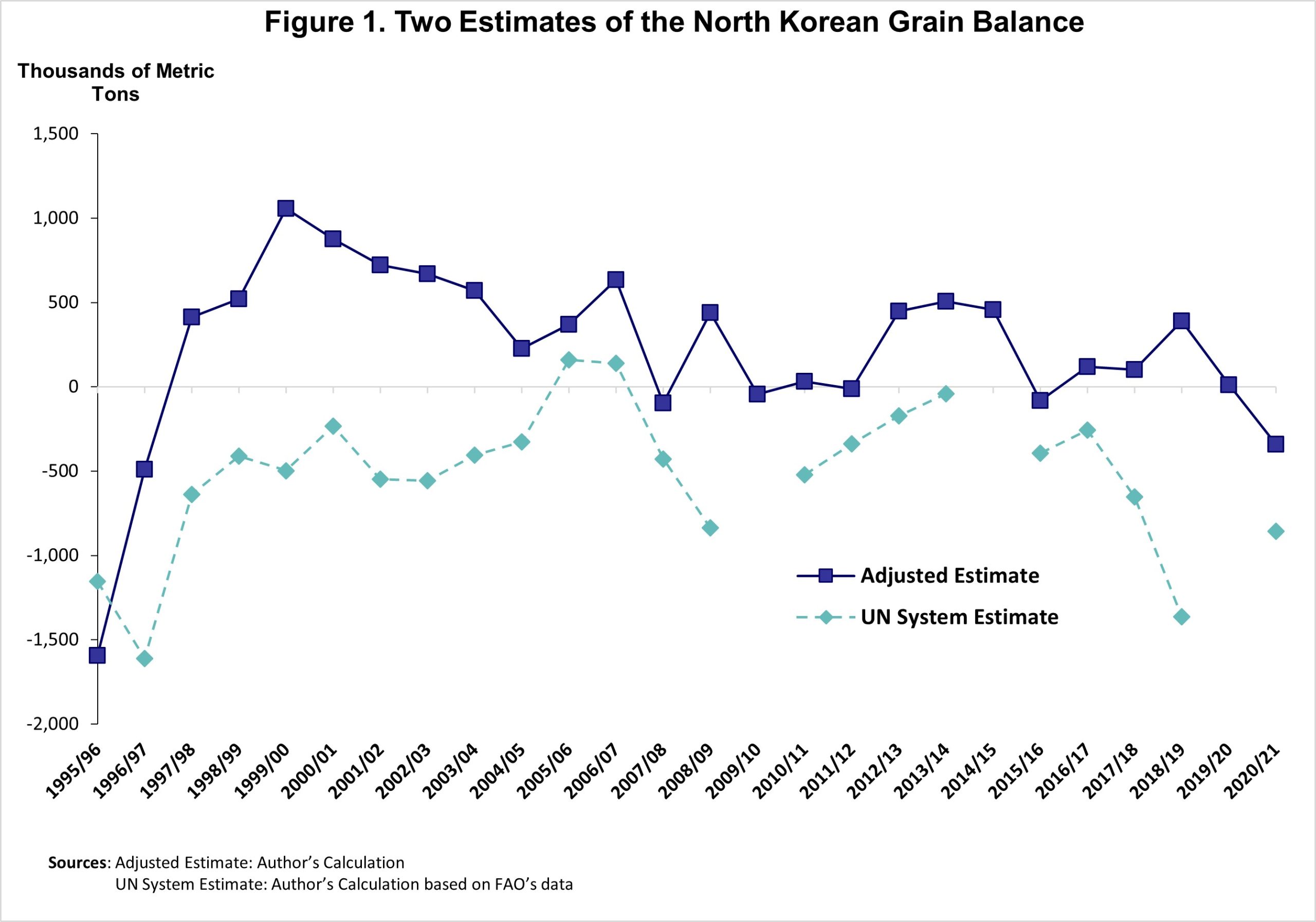 North Korean authorities regularly impede the collection and dissemination of price data, but several NGOs use informants to collect and report price data, some using cell phones connected to the Chinese cellular network. In addition, Seoul-based Daily NK and Osaka-based Asia Press consistently report data. These sources are widely used, including by the Korea Development Institute. Both sources point to a sharp increase in rice and corn prices, with corn prices increasing more than rice prices. As the price of rice—the country’s preferred grain—rises, households are forced to shift to cheaper, less preferred grains, such as corn, barley and millet, and, in the worst case, turn to grasses and foraging for other plant sources of food. Thus, the relative price of corn-rice can be interpreted as a signifier of household distress. Figure 2 shows an increase in the corn-rice relative price following the border closure in January 2020 and the issuance of scrip in the fall of 2021. 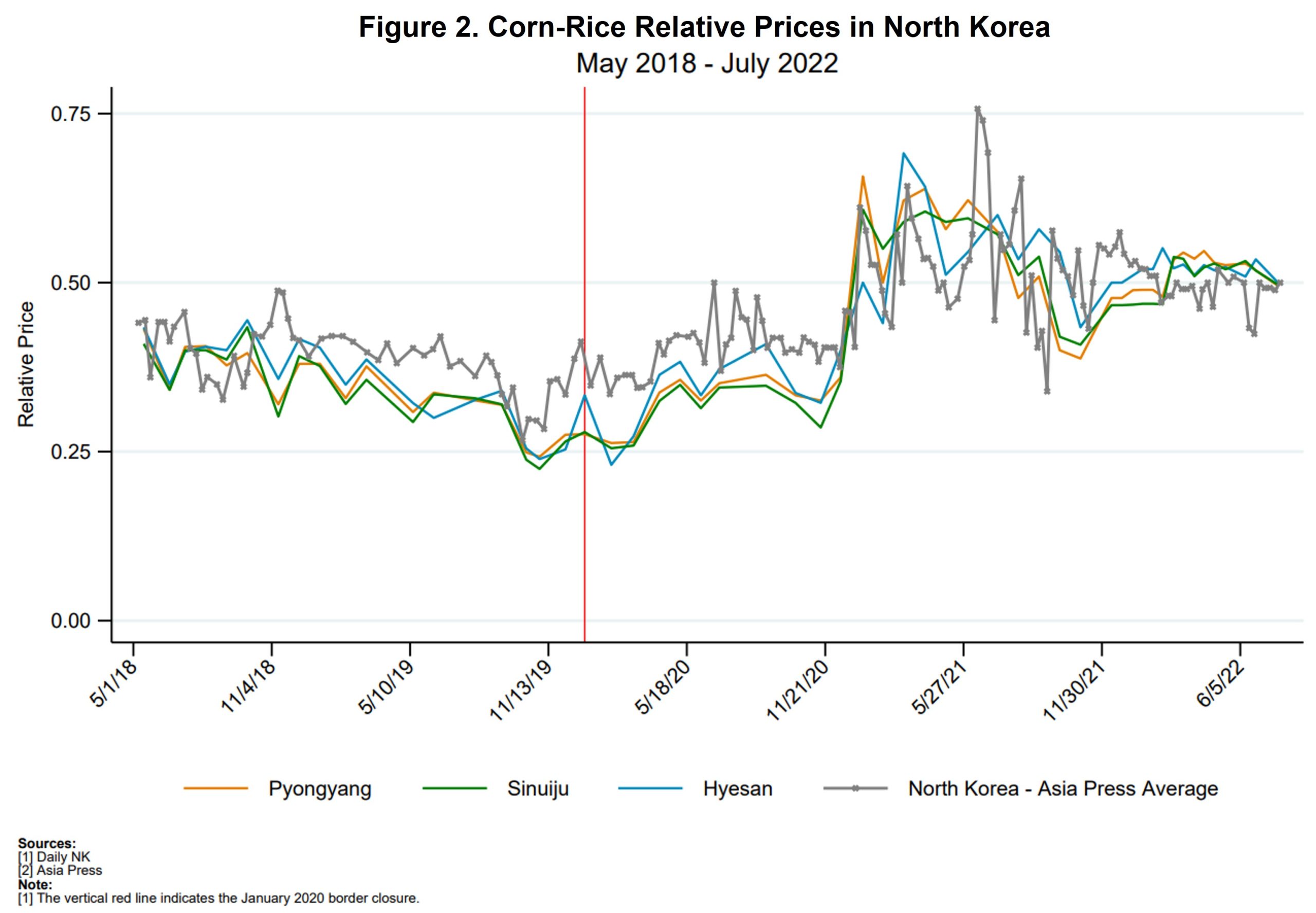 Figure 3 shows the 12-month average rolling price correlation between different cities. It suggests that the regime’s draconian border closures and limits on mobility have led to a disintegration of domestic prices across cities.[7] The law of one price, which states that prices tend to converge spatially in flexible, frictionless markets due to arbitrage pressures, has been broken. More specifically, prices in Hyesan have become unanchored from Sinuiju and Pyongyang. Since the main overland trade conduit runs from Sinuiju to Pyongyang, imports and/or aid may have helped to stabilize prices along this supply line (particularly regarding rice and Pyongyang being the politically privileged capital city), but not in more marginal areas, such as Hyesan. 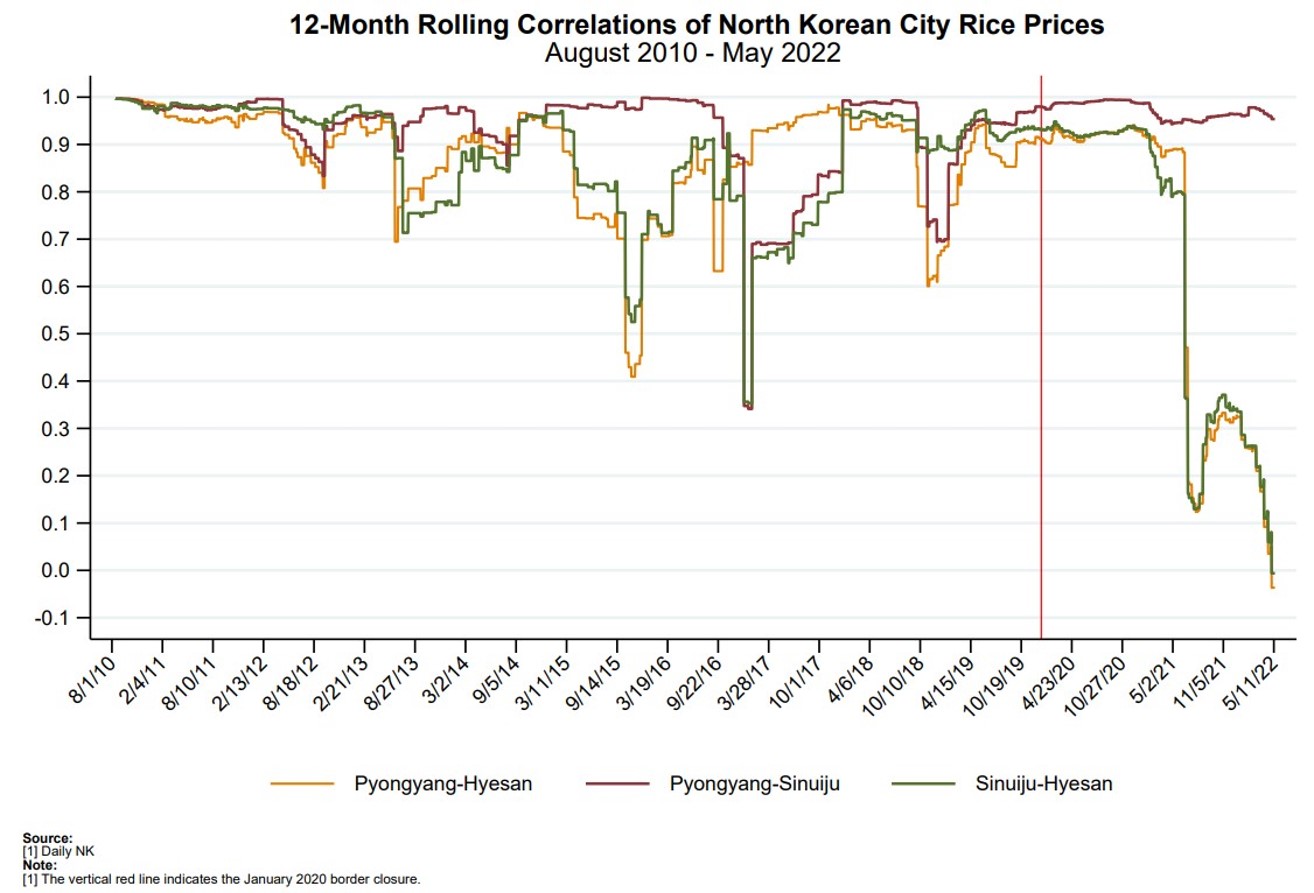 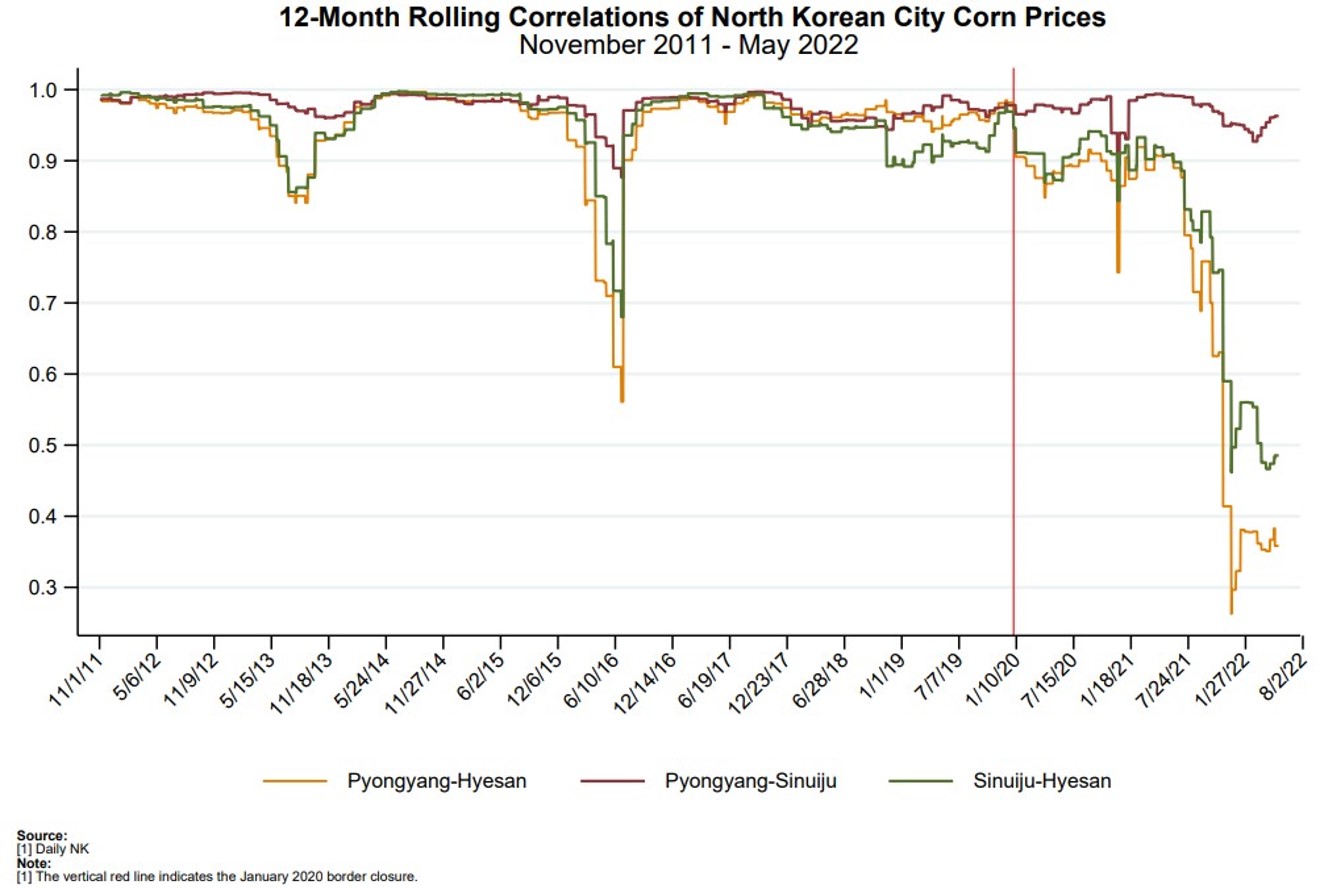 Figure 4 shows the data from Daily NK and Asia Press, along with global prices for rice and corn, respectively, as expressed in dollars using the parallel exchange rate. (In order to ensure greater comprehensibility, the separate Daily NK city figures have been averaged.) Two things are striking about these graphs: first, North Korean internal food prices appear to be higher than global prices—sometimes by a large margin. Second, this divergence significantly widened beginning in early 2021, thereby signaling a breakdown in the North Korean food supply.

Figure 4. Rice and Corn Prices in North Korea vs. the World 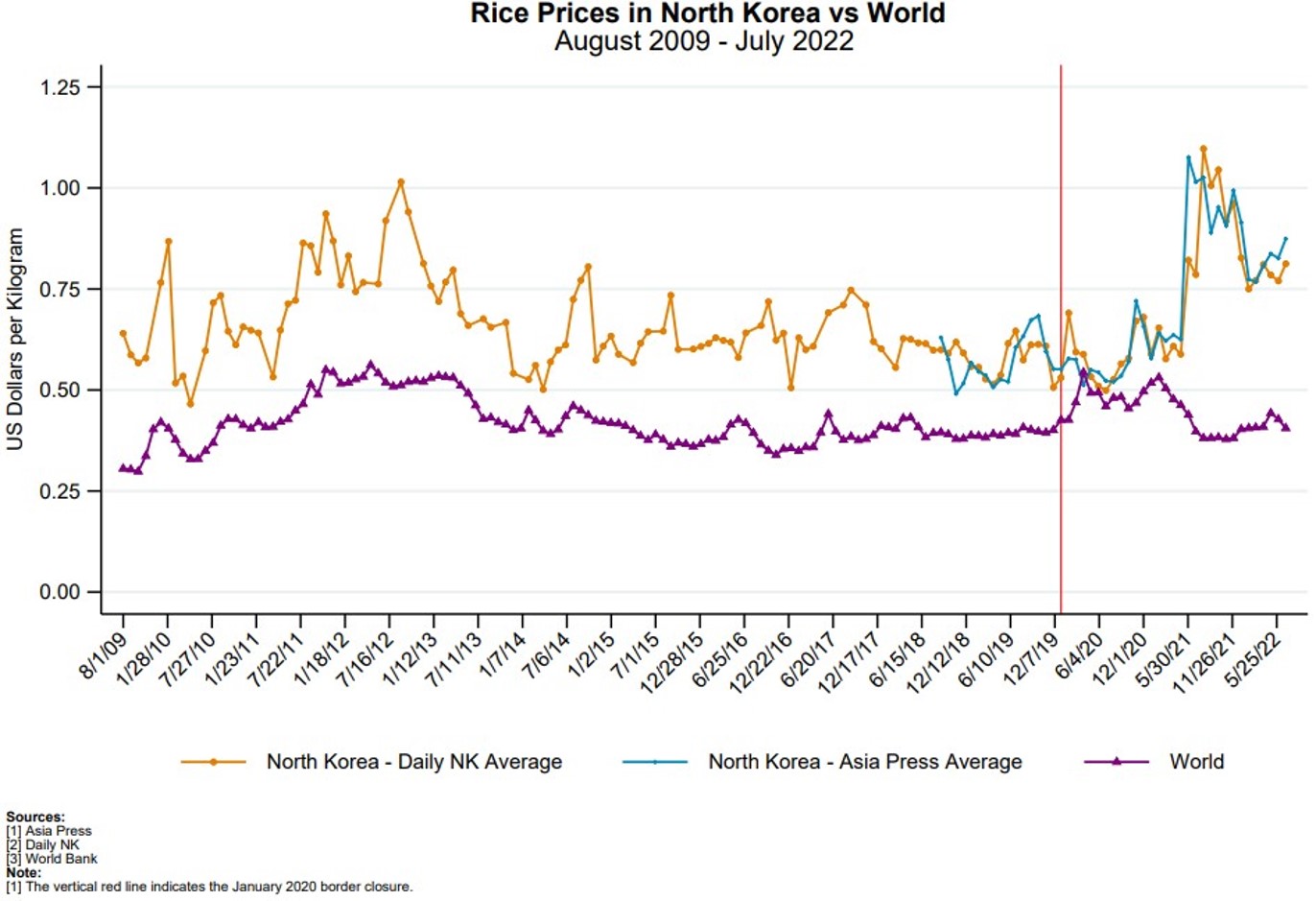 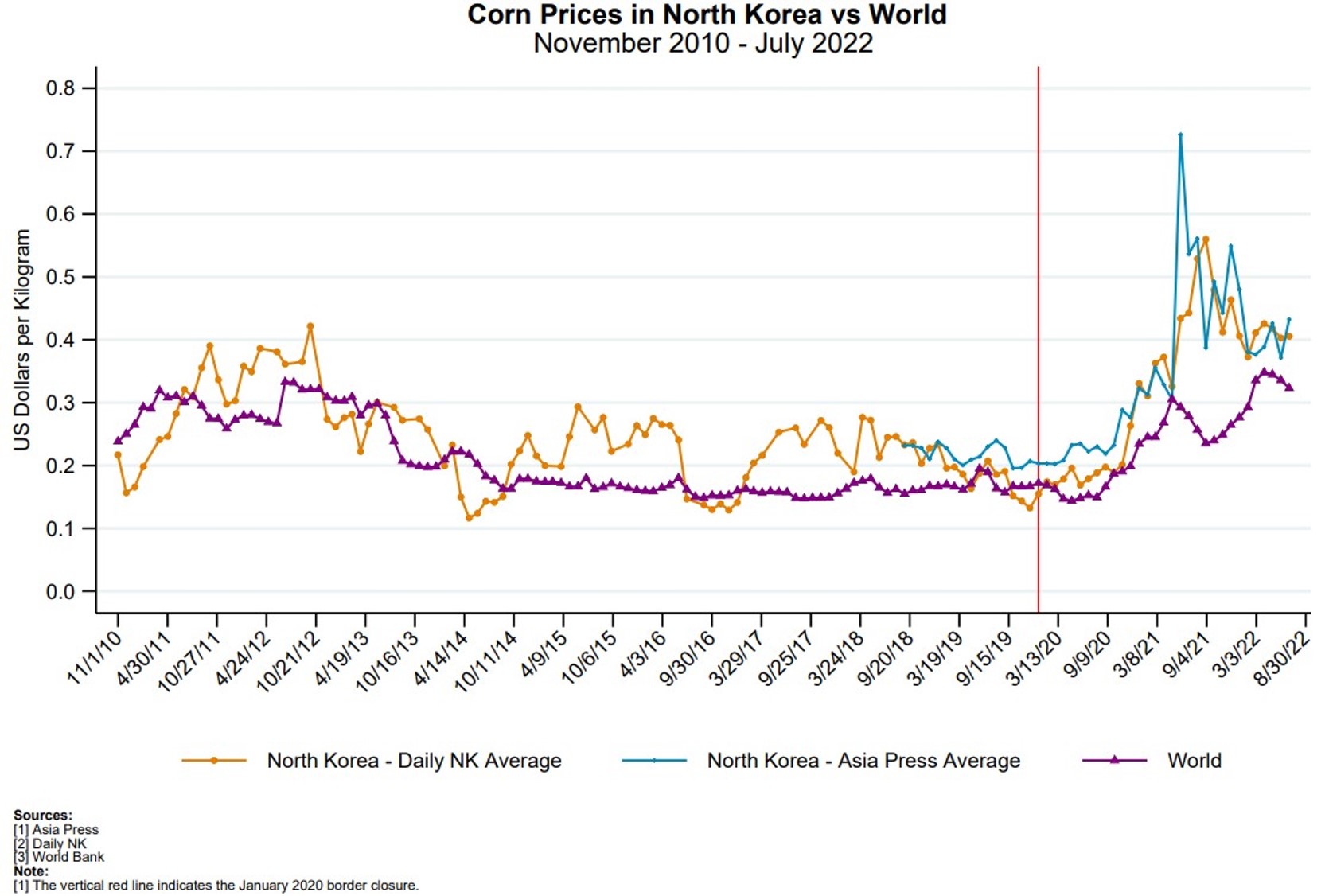 The evidence presented thus far points to a significant deterioration in living conditions and an ongoing complex humanitarian emergency with food insecurity at its core. The long-term solution to North Korea’s chronic food insecurity lies partly in a resolution of the nuclear issue —potentially bringing about significant economic sanctions relief, along with a less militaristic and revanchist position, as well as resumed trade with the US and its allies. The initiation of domestic economic reforms would unshackle the economy’s productive capacity and allow North Korea to export industrial products and tradable services, earn foreign exchange and import bulk grains on a commercially sustainable basis, just like its neighbors South Korea, Japan and China. However, the North Korean top brass has refused to adopt deep reforms, and for as long as that is the case, North Koreans will continue to live at the mercy of global shocks.

It appears the regime has finally acquired vaccines, albeit from an unknown source and only after repeatedly refusing offers of vaccines from multiple donors. It apparently embarked on a vaccination campaign in September 2022 with an unknown level of success. Even if one assumes a high vaccination rate, it’s worth noting that the pandemic is hitting an immunologically naïve population that is afflicted by hunger and extraordinarily high rates of tuberculosis. These deficiencies may constrain the country’s ability to re-open to international trade and the cross-border movement of people going forward. If China—a healthy, well-nourished country with a relatively high vaccination rate—is suffering significantly from the pandemic’s recent onslaughts, one can imagine how difficult it must be for North Korea.

Yet, despite these fundamental public health challenges, North Korea continues to develop weapons of mass destruction and delivery systems, having successfully launched an intercontinental ballistic missile (ICBM) in December 2022. In fact, the regime had a record breaking year for missile launches amid a deadly pandemic and the threat of famine. Under such circumstances, it is understandable if countries either sought to steer aid toward more deserving recipients (e.g., the numerous countries that have more profound food emergencies) or to link the provision of humanitarian assistance with other diplomatic goals. In any event, the diplomatic leverage conferred by the granting of aid seems to be low. North Korea appears to be committed to its nuclear posture, and the lack of accountability allows the regime to prioritize its narrow militaristic goals to the detriment of its citizens’ living standards. This style of governance is in keeping with what Kim Jong Il, who presided over the country’s famine in the 1990s, once said: “One can live without candy, but one cannot live without bullets.”[8]