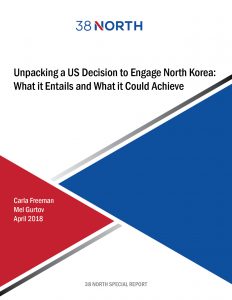 In a report published last January in 38 North, “Unpacking a US Decision to Use Force Against North Korea: Issues, Options, and Consequences,” Robert Jervis assesses the efficacy of using force against North Korea. Jervis cautions against assuming that superior US military and economic capabilities guarantee success in denuclearizing the North. He also underscores the uncertainties attendant to even the limited use of force: actors beyond the United States-North Korea binary will influence outcomes, and how North Korea itself will respond is unpredictable. It would be a mistake, Jervis observes, to “attribute the failure only to a lack of American willingness to be tougher.”

Although Jervis’ analysis draws on lessons probably familiar to any US military commander, the White House—notwithstanding the possibility of a Trump-Kim summit meeting in the near future—has surely not abandoned the idea of using the “military option” to force North Korea to cease work on its nuclear arsenal. Frustrations are running high: when international pressure on Pyongyang intensified, the regime sped up its efforts to develop a credible nuclear deterrent. Moreover, when US rhetoric toward the North heated up, Pyongyang thumbed its nose at the US, responding with increasingly credible threatening rhetoric of its own. For example, Kim Jong Un declared in his 2018 New Year’s speech that the US “mainland is within the range of our nuclear strike and the nuclear button is on my office desk all the time; the United States needs to be clearly aware that this is not merely a threat but a reality.”[1]
But in that speech, Kim also declared:

As a responsible, peace-loving nuclear power, our country will neither have recourse to nuclear weapons unless hostile forces of aggression violate its sovereignty and interests nor threaten any other country or region by means of nuclear weapons. However, it will resolutely respond to acts of wrecking peace and security on the Korean Peninsula.

The speech, while devoting considerable space to breaking the inter-Korean deadlock, can also be read as creating room for diplomacy between the US and North Korea. Donald Trump’s recent and unexpected acceptance of an invitation to meet Kim Jong Un, and China’s support of this summit taking place, may open the door to a “third way” beyond sanctions and use of force, namely reenergized engagement.

But what is “engagement,” what would an engagement strategy look like, and what could it hope to achieve? Engagement is more than a set of diplomatic actions or bargaining activities. It is a strategic process of persistently seeking common ground between antagonists to reduce tensions and divert two sides in a dispute from violent choices, all in the shared pursuit of mutual security.[2] To be sure, after several unproductive efforts at negotiating denuclearization over the years, the idea that any new diplomatic strategy for North Korea might meet with success faces both skepticism and resistance from the policy establishment in Washington. One of us recalls an Obama administration official who worked on North Korea policy lamenting that Pyongyang is like a “Taco Bell”—you might go looking for something new but you’ll always get the same thing—which is to say, not much. Indeed, from the perspective of policymakers who have pursued negotiations and other leading observers, North Korea has been largely immune to diplomatic inducements, including freezes, reassurances of security from US intervention, and the prospect of normalization of relations.

Wendy Sherman and Evans Revere have concluded that North Korea wants “nuclear weapons more than any inducement.”[3] Understanding what North Korea really wants is essential because hope that progress toward denuclearization can be achieved through an engagement strategy rests on the idea that both sides share a common goal of improving mutual security. In this essay, we argue that there is space for negotiation around the idea of mutual security, defusing tensions and creating conditions for eventual denuclearization throughout the Korean Peninsula.

We come at this discussion of engagement and what could be achieved by engaging North Korea today from two quite different perspectives on world affairs. One of us has spent decades defining a human-interest approach to international affairs centered on incorporating global-citizen values in policymaking such as peace (minimization of violence and conflict resolution), mutual respect and social justice. The other sees engagement as creating opportunities for trust building and problem solving through diplomacy between states amid the international insecurity endemic to international relations. The differences in how we see the potential for the behavior of states importantly do not preclude a shared definition of engagement and its importance in a diplomatic strategy for North Korea.


Download "Unpacking a US Decision to Engage North Korea: What it Entails and What it Could Achieve," by Carla Freeman and Mel Gurtov.