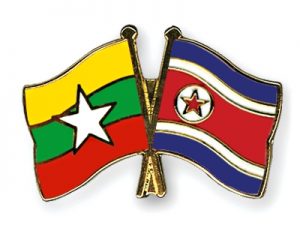 North Korea’s relationship with Myanmar[1] gets significant scrutiny in the international community, especially from the United States. Ambassador Joseph Yun, US Special Representative for North Korea Policy, visited Myanmar in July to press the government to sever its ties with Pyongyang. During trips in May and August, US Secretary of State Rex Tillerson pressed all ASEAN members to further isolate the North as well, in an effort to bring Pyongyang back to the negotiating table.

When the relationship between Myanmar and North Korea was resurrected in the early 2000s, it appeared to be based primarily on military cooperation and the shared pariah status of the two states. But now that Myanmar is making the transition to a more open political system and shedding some of its pariah status, are the future prospects of this relationship waning?

Early Friendship and the 1983 Rangoon Bombing

Burma and North Korea had much in common prior to 1983—both countries faced similar challenges and were exploring similar responses. Rangoon saw the DPRK developing fast and the Pyongyang saw Burma as perhaps willing to accept the eternal wisdom of the Juche idea and Kim’s ideological leadership.

Over the next decade, Myanmar found itself increasingly isolated following its brutal crackdown on protestors in 1988 and the suppression of democracy activists—in particular Aung San Suu Kyi—in the 1990s. The Tatmadaw (Myanmar’s military) faced an arms embargo from the West, leaving it over-reliant on China. The supreme leader, Senior General Than Shwe, saw the need to diversify and modernize the country’s military capabilities. It is said that Than Shwe’s German-educated right hand man, Lieutenant General Thein Htay, suggested that the DPRK would be able to fill that role. The DPRK, for its part, was also becoming increasingly isolated following the collapse of the Soviet Union in 1991 and its decision to pursue nuclear weapons. In this context, Asia’s two pariahs found each other.

The Tatmadaw was impressed not only by the low prices that Pyongyang was willing to offer, but also the focus, ability and discretion of North Korea’s military advisors. North Korean military technicians arrived in Myanmar quietly, “not like other foreigners,” according to one Myanmar official. “They came here without any luggage. They only took a small bag. They didn’t bring a laptop.”[3] The military ties led to the re-establishment of diplomatic relations in 2007, when the DPRK was invited to re-open an embassy in what was now called Yangon.

As diplomatic contacts between the two countries increased, so did North Korea’s military footprint in Myanmar. Throughout the 2000s, North Korean military technicians were reportedly spotted in central Myanmar along the banks of the Irrawaddy River where several of the Tatmadaw’s military factories are located as well as missile factories pursuing Scud-type technologies.[4] Residents of the Min Hla Township said they saw North Koreans while the military was building a new factory there, most recently in late 2013 and early 2014 when the military factory was being completed. The North Koreans’ propensity for discretion is notable: a storeowner at the main market in the township recalled that “North Koreans only came to the market on Sunday for shopping. Usually, they didn’t come to the town, just staying inside military compounds.”[5]

North Koreans, some the world’s best tunnelers (having learned during the Korean War to put everything of value underground), also appear to have assisted Myanmar in designing a vast network of tunnels under Naypyidaw, connecting key pieces of infrastructure.[6] Naypyidaw is Myanmar’s built-from-scratch capital city that was unveiled in 2006 and the underground connectivity is thought to contribute to the military’s defensive strategy for the city. The connected military facilities also form something of a ring around the civilian buildings, which are closer to the center, a design both symbolically and strategically useful.[7]

Due to extensive tunneling cooperation in key areas around Myanmar and some assertions made by the exile community, it has long been rumored that North Korea has been assisting Myanmar in a nascent nuclear program as well. However, similar to North Korea, Myanmar has a long tradition of opacity in decision-making, which means that a certain amount of guesswork is inevitable.

Unlike North Korea, however, Myanmar also has a tradition of political gossip and leaks that seep out to the outside world. Enough information was gathered by the Democratic Voice of Burma, for example, to sponsor a report in 2010 that concluded:

[I]t is likely that Burma is trying to attempt many of the nuclear program steps reported by previous sources. Unrealistic attempts, such as the Molecular Laser Isotope Separation project, unprofessional engineering drawings and the crude appearance of items in photos, suggest that success may be beyond Burma’s reach.[8]

The same report concluded that evidence of collaboration with North Korea on the nuclear program was scant, though “the rumored activity… should be taken seriously.”[9] It appears as if Myanmar’s nuclear exploration, if true, was half-hearted, at best.

In 2009, it was leaked that the then third-highest ranking general in Myanmar, Shwe Mann, had traveled to North Korea and toured missile facilities in November 2008. This was a significant leak, with many details including site visits (weapons and radar factories and a missile launch site) and the signing of a Memorandum of Understanding by Shwe Mann and North Korean General Kim Kyok Sik on expanding military ties.[10]

The North Koreans supposedly tightened up the rules around bilateral affairs in response to this incident and their visitors’ relative lack of discretion. Myanmar delegations are no longer allowed to take photos during their trips to military factories and other sensitive venues. Visitors since then state they’ve had to draw what they’d seen in North Korea from memory.[11]

Meanwhile, Senior General Than Shwe passed over Shwe Mann and chose General Thein Sein as his successor in part—it is rumored—because of disagreements over how close Myanmar should be to the DPRK; Shwe Mann supposedly argued that ties were too close. Yet Thein Sein went on to lead the country towards rapprochement with the United States and the world, then gracefully gave way when his party was trounced by Aung San Suu Kyi’s National League for Democracy (NLD) in 2015.

Throughout this period, US officials at all levels have made clear to their Myanmar interlocutors that they want to see DPRK-Myanmar military ties cut. The US Treasury even put DPRK Ambassador Kim Sok Chol on the Specially Designated Nationals list the day after the NLD won the election to signal intent. (Kim left the country soon thereafter.)

Most Myanmar officials today insist the relationship is over. The close military-to-military relationship in the 2000s “was a marriage of convenience,” one official said during the Myanmar-US/UK Nonproliferation Dialogue in December 2016. “We didn’t have many friends, and they needed rice and we needed weapons! Now things are totally different.”

Some observers of the two countries are unconvinced, however, especially since sensitive information is siloed in both countries so most Myanmar officials, even in the military, aren’t in the know. The US intelligence community sees enough to still be worried and American envoys and diplomats still beseech Myanmar to stop military imports. It is unclear the degree to which this is working. Moreover, a number of Myanmar businesspeople and companies remain under suspicion for facilitating transfers of funds and of military material between the two countries even during the democratic transition.

After all, businesses who owe much of their wealth to their connections to the military are still in some sense beholden to the Tatmadaw. One formerly sanctioned tycoon, Tay Za, in particular, noted that any businessman in Myanmar cannot resist if the state asks them to help transfer money to North Korea or anyone else. Tay Za attended a military elite school of the Defense Service Academy but dropped out and later built his fortune on extremely favorable concessions in teak. He is known to have helped modernize Myanmar’s military by finding arms vendors, and played a key role in Myanmar’s purchase of MiG 29s and air defense systems from Russia. Tay Za came under scrutiny in 2014 for allegedly transferring $320 million to a North Korean company before and during Thein Sein’s presidency. (He insists he just transferred the money to a bank in China and had no connection to the DPRK.[12])

Other trade may be more benign, though it is difficult to tell. One company alleged to be involved in DPRK trade is the UMG Group. According to the company’s official webpage, it is involved in distribution, education, food, financial services, entertainment, healthcare, property & infra development and IT & telecommunication. It is unclear what it sells to or imports from the DPRK. The chairwoman owned the house that Aung San Suu Kyi lived in in Naypyidaw from 2012 to 2016.

Myanmar certainly respects some of North Korea’s sensitivities more than most countries. For example, in 2010, Ambassador Kim Sok Chol and his staffers were involved in seizing a biography of Kim Jong Il by a Burmese author off the shelves of bookstores. North Korean diplomats also worked with local police to get DVD vendors on the streets of Yangon to get rid of copies of the movie The Interview. It is difficult to imagine North Koreans getting this kind of cooperation in most countries.

How much cooperation continues on military matters is largely up to the Tatmadaw, which is still outside the control of the civilian government. Relations between Naypyidaw and Yangon appear to remain good. Nonetheless, Pyongyang must worry that someday the United States and others will pry the Myanmar military fully away from its relationship with the Korean People’s Army. It seems as if Kim Chol Nam, who is a treasury-designated individual connected to the Korea Mining Development Trading Corporation was asked by Naypyidaw to leave Myanmar in June after US pressure, for example.

Given the opacity of decision-making by the Myanmar military, it is difficult to assess how successful Washington might be in its goal of severing DPRK-Myanmar ties. It is hard to even understand to what degree—if at all—cooperation between the two militaries has been reduced or even how substantial it was before Myanmar’s transition process began. Given the lengthy process of unraveling US sanctions on Myanmar between 2012 and 2016, it is unlikely that significant sanctions pressure will be re-applied to Naypyidaw. Neither can Washington offer much in the way of military cooperation as long as wars rage in the Shan and Kachin States and a harsh crackdown on the Muslim population of Rakhine continues. Consequently, despite US pressure, it is largely up to the Tatmadaw to decide what to do with their “marriage of convenience” to Pyongyang.