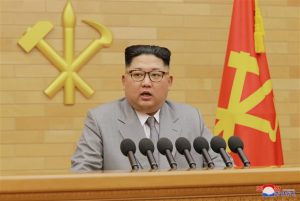 It’s that time of year again. Pyongyang’s version of “The State of the Union” is in early draft as time ticks down towards Kim Jong Un’s New Year’s Address. Everything suggests a sharp U-turn for the worse. Pyongyang’s posse of foreign policy experts have been rounded up to bash Washington, Kim Jong Un has made a second political pilgrimage to Mount Paektu and the Presidium of the Political Bureau of the Korean Workers’ Party has summoned an unprecedented late December Plenum of the Central Committee. These actions appear to signal that big decisions are in the works, the implications of which weigh heavy on the North’s end of year deadline for US-DPRK negotiations.

Pyongyang, despite claims to the contrary, is generally very open and literal, if not overblown, in its statements. And typically, Kim’s New Year’s Address covers a lot of ground. The tendencies in Washington and Seoul, however, have been to dismember, dismantle and cherry-pick the address to suit their inclinations, rather than digest it as a whole.

In reading the English transcript of Kim Jong Un’s 2018 and 2019 New Year’s Addresses numerous times, it is only when reading them together that it’s possible to see how much they are at odds with each other. The 2018 address was all bombast and bravado, threats and ultimatums. North Korea, Kim declared, has been “perfecting the national nuclear forces” and “possess a powerful and reliable war deterrent” “capable of thwarting and countering any nuclear threats from the United States” which “prevents it from starting an adventurous war” (e.g., a preventive attack). Pyongyang was “ready for immediate nuclear counter attack” with Kim bragging both about his nuclear button and the country’s capacity to strike anywhere in the mainland United States. To underpin the threat, Kim directed the nuclear weapons research sector and the rocket industry to mass produce nuclear warheads and ballistic missiles. Yet this combative crowing went unheard, overshadowed by the offered opening to Seoul via the Pyeongchang Winter Olympics.

Following the first US-DPRK summit in Singapore in June 2018, Kim Jong Un’s 2019 address took on the conservative establishment around him, going out on a limb to forge a new relationship with President Trump and the United States. In the absence of any institutional memory of the tone and content of the 2018 address, the 2019 address was read by many analysts as signaling continuity rather than radical change. However, in the long shadow of Singapore, it showed a total departure from the previous year. Mass production of ICBMs and nuclear weapons was out; conversion of the munitions industry to produce tractors not tanks, construction equipment, “cooperative products and consumer goods” was in. Kim was seemingly abandoning both sales of nuclear material to Syria and his “first use” doctrine by declaring that at home and abroad North Korea “would neither make and test nuclear weapons any longer nor use and proliferate them.” The sword of Damocles was sheaved in a bold gesture of peace with defense conversion, non-proliferation and no first use.

For Kim, Singapore had offered a shortcut to a settlement with Washington. “If the US responds to our proactive, prior efforts with trustworthy measures and corresponding practical actions, bilateral relations will develop wonderfully at a fast pace through the process of taking more definite and epochal measures” and continues with, “I want to believe our relations with the United States will bear good fruit this year.” Otherwise, he stated that if the US, “persists in imposing sanctions and pressure …we may be compelled to find a new way for defending the sovereignty of the country.”

What did Kim want? An end to joint military exercises on the Peninsula and arms sales to the South and the negotiation of a peace treaty. As he put it, “we maintain that the joint military exercises with foreign forces, which constitute the source of aggravating the situation on the Korean Peninsula, should no longer be permitted and the introduction of war equipment including strategic assets from outside should completely be suspended.” He also called for “multi-party negotiations for replacing the current ceasefire” in “close contact with the signatories of the armistice agreement” to “build a lasting and durable peace regime and advance towards complete denuclearization,” with the US, China and DPRK at the core of a peace process alongside the ROK.

If this was the new calculation, Trump’s walkout at the February Hanoi Summit boded ill for the peace and denuclearization process. Kim’s three days on the rails home gave him pause for thought. When he got back, despite the conservatives having the whip hand, Kim let the games play out. The North Korean position hardened, however, in mid-July after the US-ROK proceeded with joint military exercises, South Korea received the first of 40 F-35A stealth fighters, and Seoul announced a significant increase in defense spending. These developments ran contrary to the mood and commitments agreed to in inter-Korean summit declarations and agreements, essentially moving away from peacebuilding and toward a renewed arms race between the two Koreas. No deal was offered in working level talks in Stockholm and by the time it was announced in November that the US and South Korea would suspend their joint air drill, ‘Vigilant Ace,’ the gesture was too little too late.

Unless something dramatic changes between now and the end of the year, Kim’s New Year’s Address will likely announce that the denuclearization process with Washington will be suspended, if not abandoned, as Pyongyang turns to its own version of “Nordpolitik” and links its future foreign relations with Beijing and Moscow. The North has threatened to lift its self-imposed moratorium on nuclear and long-range ballistic missile testing should the end of year deadline pass unanswered. Whether it acts on that threat and resumes such behavior is unclear, though taking those measures should not come as a surprise. How the US responds to such actions is equally unclear, much less how US allies will see the situation. The once ripe opportunity to make progress on building peace and facilitating the denuclearization of the Korean Peninsula, is now likely to be put on hold, once again, at least until after US Presidential elections next November.