The president of the United Nations (UN) Security Council released the final report of the UN Panel of Experts on North Korea on April 13.[1] The takeaways are clear but not very welcome for champions of sanctions who believe that turning up the screws on “maximum pressure” will force North Korea to capitulate to US demands on denuclearization:

The eight-person panel should be commended for its work. Not surprisingly, with representatives from the nations with the biggest stakes in its content, the conclusions reflect drafting compromises and pulled punches in order not to mortally offend big powers (read China and Russia); nonetheless, it is a thorough and professional job. It speaks to the professionalism and diligence of the experts and to the vastly increased support for the Panel provided by member states, particularly the US government. The report is substantial, containing 75 pages of text and almost two hundred pages of supporting material in annexes. The annexes will provide grist for a considerable amount of analysis since they contain a number of diplomatic communications as well as very detailed supporting documentation on the many cases the Panel examined.

The report cites copious documentary and photographic evidence—much of it supplied by the US government—of extensive maritime evasion of sanctions. The two main areas were DPRK imports of refined petroleum products and its exports of minerals—the two most important fronts in the sanctions battle with North Korea.

The country is totally dependent on imported refined petroleum products, and mineral exports were its major foreign currency earner prior to 2016. The previous report from the Panel had already demonstrated that imports of refined petroleum products were skirting sanctions through use of ship-to-ship transfers of products at sea. North Korean coal’s “nationality” was changed in third-country ports. Both of these are expensive and inefficient processes. 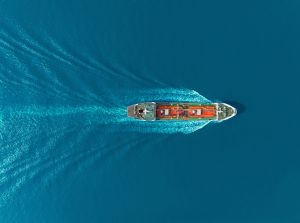 Now, the North Koreans are shipping and receiving the goods directly in larger, more efficient ships. Ships that previously had skirted sanctions at sea have been sold to mysterious entities that directly deliver refined petroleum products to Nampo. These ships are often fraudulently flagged or are flagged to states with only the most cursory oversight. The Panel recommended 12 foreign-flagged ships be designated for sanctions violations.[2] One ship, the New Regent, has been deflagged and is subject to a global port ban but continued to deliver petroleum products to Nampo in 2019.[3] North Korean vessels also delivered products to Nampo 157 times during the reporting period. But as 2019 progressed, the use of larger, more efficient foreign-flagged vessels became more prevalent, allowing the DPRK to blow the UN limit on imports of petroleum products out of the water. According to the Panel, the US government estimated that as of October 31, 2019, the DPRK had exceeded the UN-imposed 500,000-barrel annual import cap on refined petroleum products by at least three and perhaps as much as eight times.[4]

Perhaps even more important, the DPRK is exporting large quantities of coal. Coal exports were estimated to have reached 3.7 million tons from January to August 2019, with three-quarters of those exports taking place between May and August. The value of these shipments was estimated at $370 million[5]—all of it contrary to UN sanctions and all of it off the official trade books. The Panel had satellite imagery indicating that coal shipments were continuing at the end of 2019. The DPRK’s techniques for evasion were diverse. Much of the coal was sent from Nampo or Songrim (Songnim) in North Korean vessels and then transferred ship-to-ship to Chinese local barges. But here, too, the DPRK and its foreign partners are becoming more efficient and less discrete. Coal is now being shipped from North Korea directly to several Chinese ports in large self-propelled barges of a type not known to be in the North Korean inventory but which are quite commonly used in China.[6] The DPRK has also begun to ship directly to China in large bulk carriers, including a “ghost ship.” It appears to have purchased a ship destined to be scrapped. On the official books, the vessel has been dismantled, but it is continuing to ship coal.

The Panel detailed North Korean success in placing IT workers abroad as well as efforts to close down some activities such as North Korean restaurants. It mentioned only briefly what is probably a decisive issue. Many North Koreans are continuing to go to countries that traditionally host North Korean guest workers on visas other than those prohibited under UN sanctions. Foreign labor was always going to be the easiest sanction to evade because of the ability of any state desiring to employ North Korean workers to manipulate its paperwork to avoid the sanctions.

The Panel provided additional information on North Korea’s increasingly sophisticated cyber operations and involvement in cryptocurrency evasion and theft. However, the Panel did not provide as much detail or speculate on how much Pyongyang might have earned from this activity.[7]

Conclusion: The DPRK Wins This Round

North Korea “won” the sanctions struggle in 2019. While it surely felt discomfort and had to expend time, money and effort to do so, it has neutered the two sanctions that posed the greatest threat to its economy. Even worse, it is clear the Chinese are now quite comfortable violating these sanctions with only the thinnest veneer of deniability. If the Chinese no longer care that they are caught violating the sanctions, it is very difficult to imagine how the US could ever ratchet up sanctions should it choose to do so. The one great unknown is how the advent of COVID-19 will affect this situation. North Korea closed its border and cut off trade in January 2020. The Chinese economy basically went into a coma in the first quarter of the year, a decline, according to official figures, by 6.8 percent—the first quarterly decline of GDP in a generation. As with so many things in life, COVID-19 makes any conclusion about the future of sanctions on North Korea nearly impossible.